Don’t Just Be Dust in the Wind 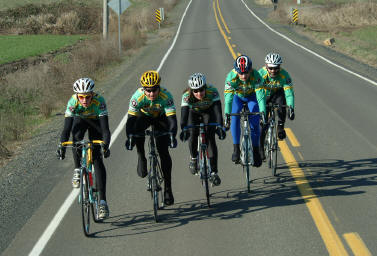 Winds can play a major role in the outcome of any race. From conserving energy to advancing position in the pack, wind can be a valuable ally or unwelcome foe. Come race day, knowing how to read and position for the wind successfully could mean the difference between an average result and crossing the finish line first. Is there any way to cheat the wind?

First, monitor the weather forecast for the day of the race. Pay attention to frontal movements and predicted rainfall that may influence wind direction and speed. Seasonal variations in weather induce changes in winds with the spring usually comprised of strong winds and the summertime comprised of lighter winds. Consider environmental and topographical effects on winds. Coastal areas usually involve sea breezes during the day some of which can become quite strong depending on the current weather conditions. Flat, open areas such as farmland are usually windswept and mountain valleys can be equally as windy in magnitude, but sometimes less predictably so.

If at all possible, ride or drive the course in its entirety before the race. Look for areas along the course where winds will play a major role, such as open expanses and the presence of large-scale obstructions such as buildings, or natural features such as ridges. Make mental notes and remain aware of these points along the course where a change in winds could cause a split in the field. In planning your race strategy, think about which side of the pack you’ll need to be on during that section and find landmarks to help you identify the section before you reach it.

If there’s a tailwind at the start, expect a fast beginning to the race. Position yourself towards the front to reduce your risk of exposure to a crash or gaps that may open due to weaker riders unable to match the pace. In the presence of a tailwind, the main field can attain high speeds for long durations and drafting is not quite as effective as in a head or side wind, so it is important to maintain a position in the first third of the field. In extreme cases, the winds may be so strong that a concerted effort at the front may result in a select group of riders to battle it out for the win.

When winds are swirling or there is a substantial headwind, take shelter in the pack and minimize your exposure to the front. All riders should minimize their time on the front of the pack as a general rule, but in a headwind this becomes even more important. Strong riders may take advantage of a slowing in the field due to a headwind by attacking just before the headwind section and then gaining valuable minutes as the pack turns into a headwind. If can be much more difficult to create a breakaway into a direct headwind, but once an established break reaches a headwind, the headwind is a strong deterrent to cooperation in the pack. Consider this as part of your race strategy if you’re a good time trial rider. Look for a turn in the road where a crosswind or a tailwind could maximize your gains.

Extreme Wind and the Echelon

In a crosswind, stay alert for the formation of echelons. An echelon forms a diagonal pattern across the road wherein each rider positions his or herself to the side and slightly back of the rider in front of them. It forms at the point when riders feel like they are getting enough shelter only if they advance to the side of the rider in front of them rather than leaving the usual gap of several inches behind the rider in front. As each rider in the first 10 riders of the pack seeks to get to the side, a single sideways line of riders develops. Quickly formed echelons due to strong crosswinds early in the race can splinter the field and result in a breakaway group of riders never to be seen again until the finish. Though similar to a single- or double-file pace line, there are a few subtle differences.

The key in an echelon is to position enough of your bike to the side of the windward rider to obtain a sufficient amount of draft, yet allow enough space that you aren’t in danger if the rider swerves slightly for an obstacle or a gust of wind moves the rider closer to you. When echelons begin to form, only so many riders will fit across the width of the lane or road and there will always be a group of riders fighting to get on to the tail end. Because space is at a premium, the edge of the road or “gutter” will be where the action is and, unfortunately, every so often the sight of a crash. The person at the very tail end of the echelon is called the “gate keeper” or “ticket puncher,” keeping the echelon available only to the riders already in it because he or she sits in the prime position to let riders in or keep them out by moving aside only long enough to let one in.

As in a double-file pace line, there is strength in numbers and the collective effort of an echelon can allow for substantial gains to be made over riders who fall behind. However, since only so many riders can be in a single echelon across the road, it leaves the rest of the riders in the pack to scramble along the gutter of the road, picking up only a small draft from the rider’s wheel ahead because there’s no room to move to the side. It is in the gutter where riders are most often gapped without even realizing it because a rider several positions ahead loses the wheel directly in front and opens up a gap that the rider behind may or may not be able to close. Staying alert is imperative – getting to the echelon in front is even more productive.

As the race approaches a section of road exposed to crosswinds, position yourself at the front ready to form or join an echelon. Starting a new echelon is an act of courage that will cost you a lot initially, but save your finish in the race if you can persuade other riders to join you. The key to starting a new echelon is that you will have move to the side of the road into the wind and then hang out in the wind long enough for the echelon to form behind you before you can drop back to take position at the end of it again. Then with a friendly gate keeper, you’ll slide right into the tail end and work your way through to the front again as each rider rotates through.

Towards the finish, as the pace quickens and riders jockey for position at the front stay aware of the winds and position yourself in the pack accordingly. Use the leeward side of the field to move up and try to avoid sticking your nose into the wind at all costs. Finally, in the sprint, fight to stay on the leeward side of the road forcing riders to fight the wind to come around you.

Learning to read and position for the wind takes practice and experience. However, the benefits are great and could mean the difference between winning and losing. Consider the importance and advantages of wind as a major component of your race strategy.

Joseph Landry Contributed to this article.