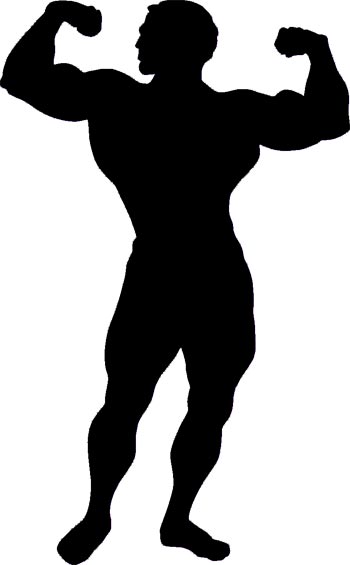 Great for the beach. Not so great for climbing.

Keith has great aerobic power. He can ride a flat 40-kilometer time trial in less than 56 minutes, making him quite competitive in his master’s category. He’s been training an average of 12 hours per week on a periodized plan for years. He eats well and has cut body fat so much that you can see veins over the muscles on his upper legs and belly. He does intervals and hill repeats religiously. He listens to his body, allowing just the right amount of recovery between training sessions. Despite all this, he consistently gets dropped on longer hills. That’s no surprise given he’s 5’10” and 180 pounds, even if it’s all muscle. He has yet to accept that if he wants to win hilly bike races, he needs to stop the upper-body strength training that gave him his wrestler’s physique.

One pound of excess muscle slows your climbing just as much as an extra pound of fat or bike. You want to lose as much fat and bike weight as possible, only keeping the muscles that power the bike. Successful road, cyclocross and mountain bike racers are not large. They may have beautifully defined arm and leg muscles, but that results more from the absence of obscuring fat than from the size of the actual muscles. Riders who have more muscle than is strictly required to power the bike can perform better by reducing muscle weight.

Andrew Juiliano, my editor at ROAD Magazine, surfs throughout the winter and early spring, so he accumulates arm and shoulder muscle. He needs to shed this excess weight before road and cyclocross season, and luckily for him, he has time to ride 15-plus hours per week (for “work” and bike testing purposes, he claims). Folks who train that much can lose five to ten pounds of muscle in a month, once those muscles stop receiving regular workouts. This rate of weight loss is significantly faster than you could lose the same amount of fat. As discussed in last month’s article, there are certain strategies to lose excess fat. This article focuses on strategies for losing excess muscle. Shedding muscle is more difficult than losing fat while maintaining training, but it can be done.

Physiology of Muscle Gain and Loss

Muscles are constantly leaking protein into the bloodstream in the form of separated amino acids. If the muscles do not also absorb new amino acids to form new protein, they shrink away and disappear rather quickly. A 2016 article by Marlou Dirks described a study in which young men on bed rest lost three pounds of muscle per week. Muscles that have been exercised 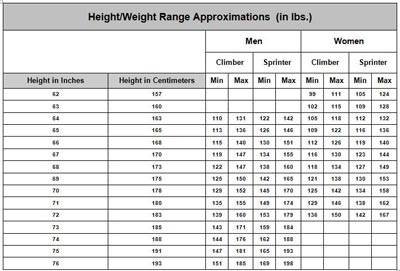 Click to see the full body weight chart and its associated article.

recently make new protein to repair damage. Muscle-repair naturally overbuilds the amount of muscle present before the exercise, so the muscle grows larger and heavier. Muscles can only regenerate or grow larger if there is an adequate supply of amino acids in the bloodstream. Those building blocks can come from recently consumed protein or from muscle breakdown elsewhere in the body, so the amount of protein you eat has a dramatic effect on muscle gain or loss.

Maintaining a body-builder’s physique requires hard resistance training and consuming large amounts of protein, but even mild exercise is enough to maintain more than the ideal amount of muscle for bike racing. Exercise can enhance weight loss, but it’s not as simple as, “Exercise more, get lighter faster,” especially when it comes to muscle. Exercise combined with moderate protein consumption makes muscles heavier rather than lighter! Endurance athletes generally need to eat enough protein for muscle repair while avoiding eating enough to actually build larger muscles.

An exercising athlete uses a mix of carbohydrate, fat and protein as fuel, with the amount and percentage of each depending on exercise intensity and duration. Only fuel not replaced between workouts contributes to weight loss. Protein for exercise fuel comes from breakdown of muscle tissue all around the body, not just in the working muscles. During prolonged exercise, the percentage of calories from muscle protein gradually increases, reaching roughly 15 percent of total energy expended as stored carbohydrate becomes depleted. If protein is not replaced after workouts, muscles gradually shrink.

The research says that the amount of protein you need to eat daily to maintain muscle mass depends on exercise amount and intensity (Figure 2). To lose muscle mass, bump your protein consumption down by 0.1 to 0.2 grams per day per pound of lean weight compared to the maintenance level.

There are several ways to cut muscle weight. Some work better than others for particular athletes. The three main approaches are: 1) Not exercising at all for an extended time (bed rest). 2) Exercising moderately while restricting protein intake, aiming not to replace all the protein metabolized in each training session. 3) Exercising at a huge volume while not worrying too much about protein consumption.

“Not exercising at all,” doesn’t mean simply not working out. Even small amounts of muscle activation maintain or delay the loss of mass. While body builders who stop going to the gym lose mass quickly, healthy people doing normal daily non-exercise activities lose muscle slower than people who lie still in bed. You can’t rest a muscle enough to shrink it if it is activated when you train, so you have to use one of the other strategies to lose muscle mass without giving up fitness.

If you are training a less than 12 hours per week, you metabolize some muscle mass, but it’s tricky to get enough protein to keep muscles in good repair without eating enough to replace all the protein metabolized during training sessions. You would have to weigh and track your food intake closely to succeed. That’s why bike racers tend to maintain muscle mass even if they train and eat well enough to become incredibly lean. It’s difficult to lose muscle mass while riding eight hours per week, but it becomes easier somewhere above 12. To lose muscle mass while training less than 12 hours per week, restrict protein consumption to 0.3 to 0.4 grams per day for each pound you want to weigh, and avoid strength training on the muscle groups you want to reduce.

(12 Plus Hours of Training)

While efficiency does increase with years of riding experience and decrease as body weight increases, it’s fair to assume that for each 100 watts a rider generates, about 360 calories are expended per hour. Extremely fit riders cruising at 300 watts exercise away roughly 1,080 calories per hour while local-talent racers cruising at 200 watts use about 720. Since muscle protein contributes up to 15 percent of calories for exercise depending on glycogen stores, expect to expend 10 percent of your calories from protein on typical rides. Cruising at 200 watts, you expend 720 calories per hour of which 72 come from protein. Protein releases four calories per gram, so we’re talking 16 grams of protein per hour. You’d need to ride ~28 hours to work off a pound (454 grams) of muscle protein, but muscle is only about 20 percent protein by weight, so while it would take 28 hours to burn off a pound of protein at 200 watts, you only need to burn one fifth of a pound of protein to lose a pound of muscle. That takes a bit less than six hours at 200 watts or four hours at 300 watts. There is an upper limit to the rate at which the body can replace consumed muscle protein. No matter how much protein you eat, your muscles can only lay up new protein so fast. The exact rate varies tremendously from rider to rider so while some athletes may be able to eat unlimited protein and lose muscle mass by riding 15-plus hours per week, others will need to restrict protein intake no matter how much they train.

Don’t Cut Too Much Protein

Eating less than the sedentary recommended daily amount of protein slows recovery and potentially leads to muscle and tendon injuries. Thus, endurance athletes looking to lose muscle weight should decrease intake 20 to 30 grams of protein per day– 0.2 grams times 150 pounds lean weight would be 30 grams–which translates to about 125 grams of muscle mass daily, or roughly one pound of muscle every three days or a bit more than two pounds per week. An athlete who puts on five or ten pounds of muscle for an alternative sport over the winter really can get back to a good racing weight in a month. Athletes transitioning from sports that gave them very muscular physiques can divide the pounds of muscle they need to lose by two and start cutting protein consumption that many weeks before the important races. Add two or three weeks for improved recovery and training once you start eating a maintenance level of protein again.

Weight Loss is Challenging But Possible

Many riders need to lose muscle mass to arrive at a competitive racing weight, yet many fail to do this. Cleaning up the diet to cut fat proves challenging for many. Cutting the excessive muscle mass accumulated from other sports, weight lifting or just genetics can be even harder. Most athletes training less than 12 hours per week must closely monitor their protein intake to achieve muscle loss without compromising recovery and performance. Some who train 15 plus hours per week still need to be careful about what they eat. Racers can dodge the challenge entirely by focusing on flatter road races, time trials and criteriums, but those who want to excel on hilly courses need to achieve optimal levels of muscle mass as well as body fat percentage. It can be done.

Read more about weight loss in Part I of this Article: Shedding FAT to Make Race Weight

Scott Saifer, M.S. and the coaches of Wenzel Coaching manage all aspects of our athletes preparation for racing and other cycling endeavors. Our programs cover fitness, skills, psychology and weight management for optimum performance.