How to Train for Your First XTERRA Triathlon 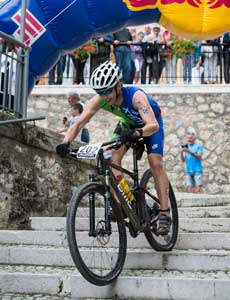 Author and coach Rob Butner races through the medieval street of Scanno, Italy at the XTERRA Italy Championship

Ever thought of riding a triathlon on a mountain bike or running a rocky trail instead of pounding pavement? When I tell people I’ve raced triathlons for the past 10 years, many of them imagine the Hawaiian Ironman and an inspirational TV broadcast.  When I tell people I race in the XTERRA series I get a confused look: “You mean you race SUVs?”

Participation in off-road XTERRA triathlons has grown all around the world for the past decade, but ask anyone outside of the triathlon community if they’ve heard of it and they will likely shake their head with no idea. XTERRA’s roots began on Maui in 1996 when it was named Aquaterra.  There are a few athletes who still race XTERRA who participated in those first Aquaterra events. Imagine the mix of of the attitudes of laid-back mountain bikers and dedicated, hard-core triathletes. As a group, XTERRA competitors are the most friendly and passionate athletes I’ve ever raced with.  Everywhere I travel to race I always know someone else and am excited to meet new friends.

The format of XTERRA usually follows distances of 500 – 1,500 m swim, 15 – 30km mountain bike, and 5 – 11km trail run.  As with any triathlon, each athlete brings their own strength to the event.  A strong swimmer has to contend with technically confident mountain bikers all while saving enough energy for the terrain challenges of a trail run.  At times you may find yourself carrying your bike or pushing it up a difficult hill.  During the run you may find yourself scrambling up a rock pile or steep pitch on a dirt hill. It’s a dirty, difficult, sometimes bloody, and fun race. 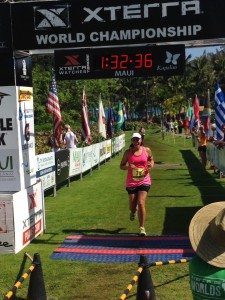 Rob’s wife Nicole finishes a 10KM running race held in conjunction with the the XTERRA World Championships in Maui, Hawaii.

You can now choose from over 300 events across the world. The race in Las Vegas is on a unique moon-like landscape. XTERRA Lake Tahoe gives you a chance to race on the legendary Flume Trail single-track. XTERRA Italy brings you to a remote part of the Abruzzo Mountains to race amongst medieval trails and towns. The season wraps up nicely with the XTERRA World Championship each October on Maui. Even if you stick to the races in your state you’ll find a unique challenge at each one — adventure guaranteed.

Training for an XTERRA Event

Training for an XTERRA triathlon will require some modifications from standard triathlon training. Your XTERRA training program must include riding trails on a mountain bike. I’ve seen many road riders take on XTERRA without any experience on a mountain bike. Some come away frustrated, some walk away with sore muscles they never knew existed, and some end up injured. Single-track trail skills and technical climbing and descending skills over obstacles like rocks, roots, sand, and mud are critical. Ease your anxiety and the anxiety of fellow racers by at least knowing how to ride on trails.

Your running program should also include practice on trails. If you run on pavement most of the time you may have become used to a certain cadence and ease due to few obstacles in your way. Forget all of that on a trail. Twists and turns, rocks and roots, steep climbs and descents will challenge your flow and efficiency. Climbing and jumping over obstacles are part of what makes an XTERRA awesome. Get used to this by running your local trails and finding the path of most resistance. Your body will thank you for it on race day. 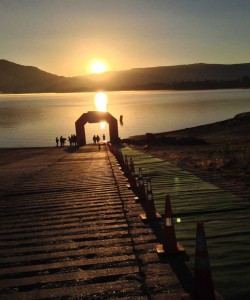 The sun rises over the start of the XTERRA National Championship in Ogden, UT

Your swim training is still important. Practicing and perfecting efficient swimming leaves you with more energy for the other legs of the event. A common practice in longer XTERRA swims is to use shorter laps, exiting the water mid-way through the total swim distance, running 50-100 yards on the beach, and then returning to the water for the second loop. This dizzying moment can be disorienting. Plan to occasionally practice in open water and be sure to include running exits and entrances.

At the end of the event, take the time to meet other racers. The XTERRA series benefits from being smaller than other triathlon series. It feels like a family “Ohana” and that’s exactly how the core group at XTERRA wants it to be. If you’ve got a family accompanying you on race-day, they’ll find kids’ events, trail run races, food, and other fun at many of the venues. See what your local race offers for families.

This next year, consider at least one XTERRA triathlon. It will be a great addition to your training and improve your overall skills.  I promise you, you’ll want to do more than one.

A section of the XTERRA National Championship course at Snowbasin Resort near Ogden, UT

4 comments on “How to Train for Your First XTERRA Triathlon”