↓ Skip to Main Content
Home › Injury › I Think I Can, I Know I Can – Using a Major Setback as Inspiration to Bounce Back

I Think I Can, I Know I Can – Using a Major Setback as Inspiration to Bounce Back

“I think I can, I know I can”
– a personal story and reflection of overcoming obstacles and being safe by Coach Kori Seehafer

Some of the best educational experiences occur during major setbacks. The biggest lessons come when the light at the end of the tunnel is a mere speck — but one way or another we persevere, focus on that light, and come out in the bright sun. We somehow surprise ourselves by what we’ve done. These types of inspirational stories draw me to sport and keep me involved with cycling at various levels. Most of these stories have a common theme: people focusing on the positive things they can do to improve and overcoming the negative things limiting their performance. 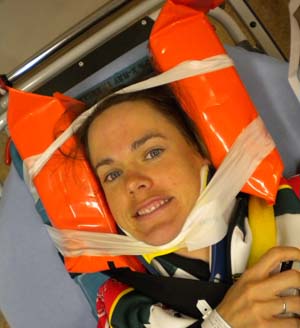 I suffered two major setbacks during my cycling career, including breaking my collarbone and suffering a severe head injury. Both physical events made me emotional and left me questioning why I was a professional cyclist. It was difficult enough stepping away for months and then trying to physically build back. During the comeback, the challenges were fear, lack of confidence, the inability to ride close to people, and the seemingly monumental task of building race fitness again. Accomplishing goals became about mentally focusing, doing, and believing. It’s okay to fail some, and being open to learn the beautiful process of coming back taught me how to be a champion.

The Power of Mental Focus

A lot of inspirational stories begin with mental focus.  For a long time in various athletic endeavors, teams have used sports psychology to help athletes perform within their athletic endeavor.  A method used with groups is a visualization technique where the athlete visualizes a “perfect competition.”  Generally speaking, visualization is the process of creating a mental image or intention of what you want to happen or feel.  During a race, cyclists use this technique by focusing on what they want to do during the race, so they actually do it.  It takes some prep off the bike, so you know what to rehearse on the bike.  But, when it’s practiced, most athletes will confirm its effectiveness. (See below for strategies on how to do this)

Focus on what you can do rather than what you can’t.  This was the main thing I had to learn while overcoming obstacles.  In 2007,  I broke my collarbone in the early season at the Redlands Cycling Classic.  Six weeks later I had surgery, and the doctor allowed me to race four weeks after that at the Montreal World Cup and the Tour of Montreal.  He said I could race, but I couldn’t crash. What was the first thing I did at my first big race back?  I crashed. I was fortunately unharmed, but I was angry with the doctor for having me focus on crashing because my thoughts became reality.  But I got up, brushed off the dirt, felt a little less scared, and finished the World Cup.

After the event, I calmed down.  It was time to “overcome obstacles” (see below).  I realized I was there to gain fitness with the ultimate aim of qualifying for the Olympic team.  I knew I needed a game plan to begin my journey, so I reached out to my husband and reflected on the events.  As an experienced racer and team director himself, he helped me devise a game plan of “How to be Safe”  (see below). 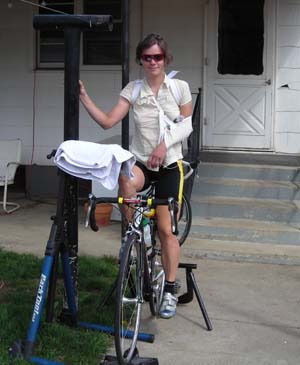 I  had many days of racing and could practice using these tools at the Tour of Montreal where I was faced with obstacles like rain, bumpy roads, and stiff competition. I didn’t want to be there, but I told myself I had to start somewhere.  If I could figure it out here, I could apply it anywhere.   I found myself riding in the back due to my lack of fitness, but while I was there, I practiced relaxing, looking forward, and always having an out.  I believed I would be stronger both mentally and physically after this event.  It trained me to be mentally tough, and the mental focus started to become automatic, so when I gained strength I was confident again and could work on obtaining my goals – winning an international event and qualifying for the Olympic Talent pool.  I had never done this before, but I did eventually do it.  Less than two months later I won the Prologue in Route de France and wore the leader’s jersey for three days before handing it over to my teammate Amber Neben.  Then a month after that, I was selected to be in the Olympic Talent Pool.  It was a major breakthrough for me.

The other nasty physical event in my life occurred the year before.  I suffered a head injury at the Tour de ‘Toona (a 7-day stage race).   Head injuries make a person overly sensitive and out of sorts.  It’s hard to process things, and I was in tears constantly.  After healing up and getting the “ok” to race, my first race back was the Tour of Holland as part of the US team’s preparation for the World Championship Road Race. There were over 140 international competitors, the majority of them also preparing for the Worlds.  Needless to say, it’s fast, very fast, and the riders ride close and aggressively. At the beginning, I was scared and crying every night.  I didn’t think I’d figure out how to ride at the front of the group again.

In the first five days of the 10-day race, the drivers in the race caravan following the race could always see me as I stayed at the back of the pack. I wanted to see the front but didn’t know what to do.  On day three, I went to our National Team director, Jim Miller, and told him I was failing; I wasn’t World’s material this year, and he should send me home. He told me no. He said he believed in me, and that I would figure it out. That night I sat in my room and asked myself, “How do I get to the front so I can start racing?”  The answer was “focus on what you can do.”  I called my husband, and together we reviewed things to do:  Relax, look forward, move forward (follow the straight line to the front/keep your handlebars in front of people) – the same safe tactics I eventually had to practice in Montreal a year later after breaking my collarbone.  The next day I repeated these three things in my head for the entire four hours of the race. By the end of the race, I saw the front, but it took another two days until I could stay at the front.

Because I was nervous, I would surge a lot trying to pass people, and  I would get so blown trying to get to the front. But when I focused on moving up in the middle of the peloton and being efficient and moving forward for the brief times when the rest of the racers were resting, I could start staying in the front a bit longer.  Finally by the end of the Tour, I felt like I was participating in the race and beginning to surf the wave of the pack.  I had a few days of fun surfing and even managed a day off the front, winning the most aggressive rider jersey at the end.  I felt so empowered that I had figured it out again.  I continued to race in Europe, and I concluded the year by being selected for Worlds. 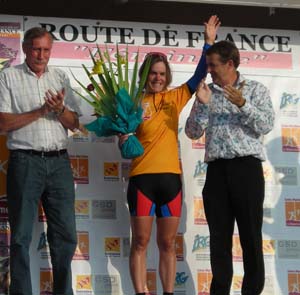 Many things are possible if you believe and focus on what you can do.  When we’re really down, we have to learn to be our friend, and encourage ourselves throughout our struggles. Whether you are racing and training for the World Championships or working to return to your local group ride again, the process is the same.  If you let the negative voice control your thoughts it becomes reality and you get defeated.  Your thoughts are your reality, make the most of your thoughts and you’ll make the most of your time and effort.

How to be Safe:

Coach Kori Seehafer works with all levels of beginner to elite cyclists, including paracyclists. She is available for monthly training and one-on-one skills work and consultation.