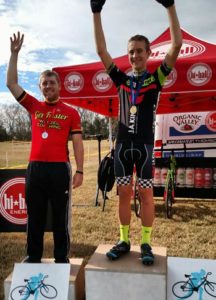 For some racers, the upgrade from Category 4 to Cat 3 on the road, for instance, may happen as quickly as a few months. For others the challenge to break out of the same category may take years. It may seem straightforward that a motivated racer would want to progress from category to category as quickly as possible, but sometimes, even when you are excited to upgrade, there are reasons to delay that request and remain in a lower category longer.

The reason? Learning to win.

Recognizing the Value of Winning Experience

Learning to win is the process of mastering one’s way around the pack, moving swiftly, confidently and with strategic timing. It’s the ability to navigate to prime positions for attacking, sprinting and cornering in the company of competitors of similar ability. It also involves experiencing and feeling what it’s like to place or win. Crossing the line first, standing on the podium, collecting a prize, and garnering praise are all part of the winning experience and motivation for the future.

Finding your way to victory also reinforces your beliefs in your strengths, knowing that you do have the ability to sprint, climb or time trial, for instance. Learning to win means going out on top of one category with confidence before upgrading to the challenge of the next one. For those who have the upgrade points nearly in line but have never stood on the podium, learning to win can mean potentially holding yourself back from the next category in the short term in order to perform better when you finally do arrive there. Of course, there are some mandatory upgrade rules that may force an upgrade, but if a rider is gaining points by placing mostly 5th-9th, sticking around longer in the category to earn a podium or two can pay off later in the higher category races.

Going the Distance to Upgrade to the Next Category

The biggest jump most male racers will need to prepare for is the change from Cat 3 to Cat 2 — and this can also be true for cyclocross and the track. While upgrading from Cat 4 to Cat 3 can be equally challenging for some, the increase in race distances, intensity and required training time between Cats 4 and 3 aren’t usually as great as from Cat 3 to the combined Pro/1/2 races. For women this jump usually occurs going from Cat 4 to Cat 3 because more races are combined Pro/1/2/3. These differences will also depend on the size of the district a rider competes in.

Having enough points to upgrade does not necessarily mean that a rider is ready to consistently ride the increased distances and intensities in the next category. The overall training benefits that one gets from racing are likely to be higher when a racer can finish races strongly and spend considerable time at racing intensities, rather than rushing to the next category where the racer may be dropped and unable to finish races.

If you’ve been waiting to upgrade and haven’t been forced to do so, when is best time to finally make the switch? For the male rider looking to make the big jump into Cat 2, often the best time can be in the final races of the summer season. Usually by this time the stronger Pro/1/2s are winding down their seasons and the racing isn’t as tense as earlier in the season, making for a friendlier entrance to the upper ranks. It may also allow for upgrading during the time when twilight series and other regular racing are available for an easier transition to the faster racing. For a Cat 4 or Cat 3 rider that gains the points to upgrade quickly at the end of the year, it may be worth waiting through the winter and the first few races of the year to upgrade. Upgrade timing isn’t quite as important in women’s racing since the categories are so often combined, but for the racer looking to make the jump in a district where the gaps between the categories are large, the same advice above applies.

Intimidation is a great factor in hindering performance when a rider first upgrades. Having a feeling of belonging and deserving can greatly affect the confidence a rider displays when moving in the pack, going for a wheel or making a jump or attack. Coming in at the last part of the year or waiting through another winter of base training can help a rider slide into his or her new category with confidence.

And finally, never forget that cycling is a team sport. If you have already reached the required amount of points needed to upgrade and have teammates in the same category still needing points, consider sticking around for a race or two to help your teammate earn the required points as well. Learning to be a good teammate is as valuable as learning to win yourself, and you’ll all be able to take the team lessons learned to the next category.

Head Coach Kendra Wenzel has been coaching upcoming elite racers to success on the national and international levels for over 20 years. Learn more about Wenzel Coaches.