Ride Clean – in the dirt 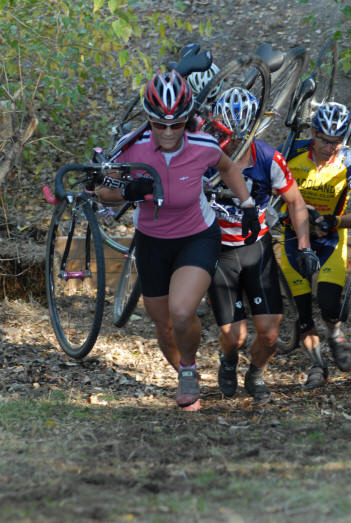 “Ride Clean” to most cyclists means staying drug free. While all athletes should stick to this sort of riding clean, there’s another kind of “ride clean” in ‘cross racing that truly is performance enhancing. The “ride clean” I’m talking about is the importance of “flow” in cyclocross — that is, riding smoothly, carrying momentum, and staying mistake-free. While it sounds simple, it’s actually much more of a process to carry it out.

A typical crash causes a rider to lose at least 15 seconds and about four placings. A flat tire usually costs even more. No one wants to ride slowly, but many riders may actually speed up their net performance by slowing down and gaining more control.

Start your ride to improved flow with even pedal pressure. Most riders struggle with too large of a gear on climbs and too small of a gear on flats. Much like a Paris-Roubaix rider, use a slightly larger gear and lower cadence to power over bumpy terrain on the flats, minimizing the jostling that the bumps will cause to your upper body. As you approach a hill, maintain your momentum at a cadence that is still pushing you forward and not just coasting into the hill, but then shift before your momentum runs out into a smaller gear to power up the rest of the climb. If you can’t shift mid-climb, start with the gear you need to power over the toughest part of the hill and spin it faster in the beginning. In the same way, gear down going into turns instead of mashing too big of a gear out of tight spaces or trying to shift mid-turn.

Hard hits on the front and rear wheels can cause pinch flats. To avoid them use your arms to absorb shock and keep your upper body from rocking in a way that might throw you off your intended ride line. Pump your bike like a mountain biker into short descents and berms, allowing you to gain speed and lighten up your wheels going into short rises.

Carry your speed into barriers, dismounting early if necessary rather than waiting until the last second. Practice at more manageable speeds first, then adding speed and dismounting earlier. Conquer the speed, then the closeness. Taking an extra step or coasting for a moment on your dismount side pedal will always be faster than risking crashing or bobbling.

Practice lifting your bike in a smooth motion, knowing exactly where you will put your hands depending on the kind of barrier and amount of speed. Ride a course in advance, deciding when you will carry and when you will shoulder your bike. Short, fast barrier runs usually will allow a carry, while longer runs are best conquered with the bike on your shoulder.

When lifting your bike over barriers, keep your elbow close to your body instead of reaching around with your elbow pointed out and upward. That way if you have to lift your bike higher at some point during the carry, you are able to lift it straighter upward and outward rather than up and into your torso. This does take more strength, so it’s something you can work on in the gym as well as with the bike itself. Strengthen your core. Strengthen your core. Strengthen your core. I can’t say it enough. The dismounts, remounts and twisting that your body endures during a ‘cross race are much more tolerable when your back and abdominal muscles are stabilizing the effort.

When Muhammad Ali said “Float like a butterfly, sting like a bee,” he wasn’t just making poetry, he really did mean that he needed to stay light on his feet in order to create opportunities to strike.  Stay light on your toes as you hurdle barriers and charge run-ups, relying more on the power of your larger muscle group in your quads rather than your calves.

When preparing to remount, set the bike down gingerly to keep it from bucking or bouncing. Avoid just plopping it down, instead, lowering it gradually and controlled.

While these are just a few tips, tackling even just a few of them can make a huge difference in your flow and overall performance. Want to see how it’s done right? Check this video of Ryan Trebon in a local cyclocross racing in Oregon. As one rider commented, “Four seconds says it all…”