Speed vs PURE SPEED on the Bike 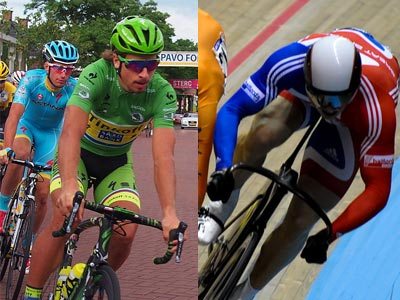 The training demands and musculature of a road sprinter like Peter Sagan differ greatly than a pure track sprinter like Grégory Baugé.

“Fast” is a vague term in cycling that means different things in different contexts. We might say that someone who can hold 29 mph for an hour is fast, or say the same thing of someone who can sprint to 44 mph for 10 seconds. We talk about particular kinds of training being good for speed, sometimes without specifying whether we are talking about aerobic speed or sprint speed. That can lead to confusion because the training for pure sprinters should be different than the training for endurance racers who sprint at the ends of events. A criterium specialist or road racer might read advice for developing speed for track sprinters, including phrases like, “train slow to go slow,” and end up losing faith in their actually appropriate training plan.

Conversion of nearly all FG fibers to FOG fibers is essential to success in road, MTB, criterium and cyclocross racing. Even “endurance” velodrome racers (those who do events longer than the match sprint) perform better the more FOG fibers they have. In all of these longer events, fast twitch fibers will be needed for keeping up before the finale. Fatigued FG fibers are useless in a final sprint, so training to convert FG to FOG fibers that will be ready to work in the sprint is training for speed for these riders.

While FOG fibers are essential to success in almost all cycling disciplines, they are not quite as effective as FG fibers for generating one short burst of speed. Track sprinters need to be able to make a maximal effort for 200 meters or so but rarely do they sustain an effort for multiple minutes before sprinting or repeat an effort without an extended rest period. They actually perform better with plentiful FG and minimal FOG fibers. Advice for track sprinters reasonably includes an admonition to avoid base miles and warnings that training “slow” makes you slow, even if that “slow” training is maximal efforts of several minutes duration.

It’s easy to be confused by advice on developing “speed” if you are not careful to distinguish track sprinter speed from speed for other sorts of cyclists. Both track sprinters and other cyclists go as fast as they can when sprinting, but track sprinters can go faster because they sacrifice endurance to enhance speed. To work on speed, track sprinters who have no goals in longer events should be actively avoiding training that causes a FG to FOG conversion, while cyclists with longer-event goals want to maximize that conversion. Endurance-oriented cyclists can train their sprint, even doing the same exercises as track sprinters, but they need aerobic base and FG to FOG converting power training, unlike pure sprinters.

If you are reading advice for training for speed, be careful to distinguish what sort of speed.

Head Coach Scott Saifer has been coaching and writing about cycling for over 25 years. He works with all levels of endurance athletes.