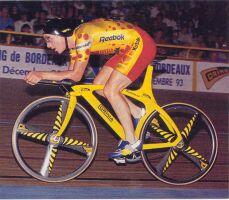 The Hour Record is the world record at any given time for the longest distance traveled by a solo rider on a bicycle in one hour not assisted by wind, hill or another vehicle or power source. Hour records are set on velodromes or other closed tracks. The first hour record was set by Frank Dodds in 1876 at 26.5 kilometers (16.4 miles). After numerous advances, Eddy Merckx pushed the Hour Record to 49.4 kilometers (30.6 miles) in 1972.

Starting in 1984 with Francesco Moser’s “Funny Bike” with two disks and a larger back wheel and smaller front wheel, many cyclists have used improved technology to beat the old records. Cyclists using disks and specially shaped frames but no fairings pushed the hour record up numerous times, culminating with the record set by Chris Boardman in 1996 at 56.375 kilometers (just under 35 miles) in one hour.

In 2000 the UCI recognized that the use of funny bikes was making it impossible to compare current records with the old time records and developed “The UCI Hour Record”, which must be set on a spoked wheel, diamond frame bike similar to what would have been available in the 1960s and 1970s. Once the new rules were established, funny bike records were called “UCI Best Human Effort” rather than Hour Records. Chris Boardman returned to the track in 2000 to advance Eddy Merckz’s record by 10 meters on a traditional bike. The current UCI Hour Record is 49.700 kilometers (30.8 miles) set by Ondrej Sosenka in 2005. It has advanced only three times and less than 300 meters since 1972.

The UCI hour record was reset more than 20 time between 1900 and 2000. Every time but one it was set between 102 and 108 rpm average cadence. The only exception is Chris Boardman who rode longer than typical track cranks at a cadence in the mid 90s in the 1990s.

The World Human-Powered Vehicle Association (WHPVA) record can be challenged on any vehicle that is powered entirely by the effort of a single human. Disk wheels, fairings and distinctly odd geometries are allowed. The current WHPVA record is an amazing 90.598 kilometers (56.2 miles) in one hour, set by Sam Whittingham in 2009.