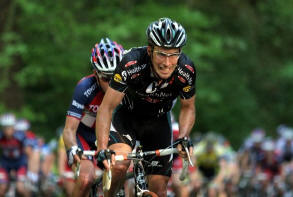 For every action in the race by a competitor or teammate, there is always a choice of reactions by every other rider in the race. In the excitement of being in a racing pack, it is important to recall the basics of strategy that can help you choose your own actions or reactions that can help you win or force you to lose a race. Specifically, there are several different scenarios during a race that, if done right, can win you the race or help a teammate win the race.

The first scenario is attacking — specifically knowing when and how to attack out of a group.  When you can, attack when the pace slows, especially in a criterium.   This will increase your chances of forming a breakaway.  You don’t want to attack when the pack is already strung out, because chances are you won’t go anywhere and you’ll expend too much energy.  Attack from farther back in the pack and get a jump on the other riders. This will act like a slingshot for you and give you a good gap on other riders.  Good places to attack are going into corners, right before a climb, or at the top of a climb.  Other good places to attack would be in a heavy crosswind section. When you attack, ride along the side of the road that will prevent others from drafting off of you.  Make your attacks count; don’t just attack every chance you get, but attack with a vengeance and commitment.  Half- hearted attacks are a waste of time and energy. Always attack to win.

Now that you have attacked, you have formed the second scenario which is a breakaway- what to do now?  If you feel you are the stronger of the riders in the breakaway then you push the break at first and make sure it gets established, but keep your efforts smooth and consistent.  Once the break is established, make sure you do only as much work as the others in the break, and not more. If you feel you are the weaker rider or just not feeling strong, try to sit on the break and maybe you will come around, or pull through but only just enough to keep the pace smooth.  More times than not, when the break is just getting established you have no choice but to pull through, or you will be caught.   Once the break is established and there is a good rotation with your breakaway partners, you should find it easier and have time to rest.  Assess your breakaway partners and make sure you are confident you can attack the break successfully or win the sprint.  Don’t be fooled by the other riders in the break who might be bluffing of their weakness. Eat and drink at the back of the group so others don’t see you.  Try to use solid colored water bottles so the other riders can’t see if you’re out of water or have full bottles.  When the finish is coming up, try to jump from the back of the group to use the slingshot effect and get a gap on them.  Chances are if you get a good enough gap, the others in the group will be looking at each other waiting for someone else to chase and you are on your way to a win.

Once a breakaway is successfully established up the road, the third scenario is blocking.  What is blocking?  Blocking is a very important part of the team aspect in bike racing and a way to effectively slow the progress of the pack help a teammate that has broken away from it.  Blocking should be done only if you are happy with the makeup of the break and should be done smoothly and subtly – in fact, so subtly that some other riders may not even realize that you are impeding their progress.  What you want to do is go to the front of the pack and ride a smooth tempo at a fast pace but slower than you would be going in the breakaway.  This will allow the break to gain time and it discourages other riders in the pack from attacking you and coming around you.   Other good techniques are to lead the pack through the corners and slow down causing an accordion effect and discouraging other riders to chase.  If one team organizes a chase, try to sit on the wheel of the last rider and rotate through.  As you get to the front of the group slow down just enough so the pace goes down.  As you pull off, the other rider has to then pick the pace back up, which causes disorganization with the chase. This technique is often looked at as controversial, but it is effective nonetheless.

If you and your team are successful in initiating an attack, organizing a breakaway and blocking for those up the road you will be able to take control of the race and potentially achieve success. At the same time, paying attention to the reactions of other teams, such as choosing to block or not, can tell you how they assess the strength of any given breakaway and the chances of their rider in it. Keeping a clear head and making use of these basics can keep you in control.