So what is with all this barefoot running? While I believe that we can thank Christopher McDougall and his book Born To Run as the reason for much of this latest craze over running un-shod, barefoot running is really not all that new. There are a handful of elite athletes who have been going shoe-less for years. I can remember running the Tuscan Half Marathon about 8 years ago and watching Bassirima Soro absolutely destroy the full-marathon course with a time of 2:20 wearing nothing on his feet. And of course, if you have read Mr. McDougall’s book, you will know that there have been tribes all over the planet that have been running barefoot since their creation. However, as a coach advising several endurance runners, would I recommend this method as a means of training? Is there any added benefit for the middle-aged athlete who has spent most of his or her life walking and running with shoes on? The answer is not that simple…let us explore further. 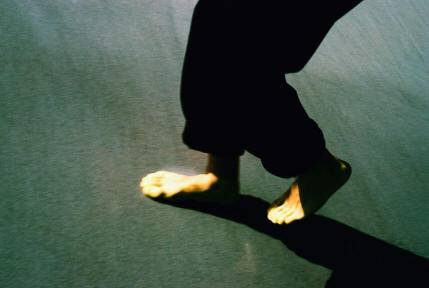 I must begin by saying that I am an advocate for gait analysis and working to make your stride more efficient. I’ve also bought into the idea of utilizing barefoot running, or wearing thin-soled shoes such as Vibram 5-Fingers ™, in order to help you achieve this. I have even gone out and bought my own pair, which I use quite regularly. And the reason for this is simple biomechanics along with an understanding of our own feet.

Let’s begin by examining the foot along with a runner’s foot strike. The foot is made of roughly 26 bones, and the joints between these bones aid the foot in acting as both a rigid lever and shock absorber. During the initial stance phase of the running stride, the heel begins the process of the “lever” action at initial contact. At mid-stance, the entire foot is in contact with the ground and the medial arch collapses (pronation) in order to absorb some, but not all of the force from the foot strike. It then stores this energy in order to assist with the transfer of weight to the forefoot. With a bare foot, the arch is allowed to conform to the terrain that is being covered without affecting the lower limb, which would not be the case in a hard-soled or stability shoe that is posted (higher density EVA under the arch). At the final stage of the stance phase, the heel lifts and the foot rolls to the outside (supination) and some of the stored energy from mid-stance is used to propel the body forward.

Now, most research has shown that runners who go without shoes tend to have (or gravitate to) a more mid-to-forefoot foot strike. The argument has been made that this, in turn, takes away not only the rigid lever action of the foot, but also the natural shock absorber in the medial arch. While this is true, you can’t deny that with a mid-to-forefoot foot strike, you now have two other shock absorbers that come into play – your ankle and your knee. This style of running will increase the rate at which the knee and ankle bend, keeping your center of gravity over the contact point with the ground and negate any stopping forces that occur with a traditional heel strike. In addition, with the elimination of the proposed rigid “lever” action created from the foot, you essentially minimize contact with the ground along with any additional loading forces. As Sir Isaac Newton explains in his third law of motion – for every force, there is an equal and opposite force applied. Every time a runner applies a force to the ground, the ground exerts a force back that resonates through the lower limb, knee, hip, etc. By excluding the initial phase of the stance (heel strike), the necessity to overcome one of two opposing forces is taken out of the equation. The fastest runners in the world run as if they are floating, spending hardly any time in contact with the ground.  In summary, from using barefoot running as a training tactic, you can become highly in-tune with your body, and potentially find a more efficient running gait.

Recently, I have spent some time associated with a widely-known, successful retail store chain which specializes in running shoes. When Born To Run was released, there was a significant influx of enthusiasts inquiring about running barefoot, and asking whether or not we sold Vibram 5-Fingers™. After briefly talking with some of these individuals and analyzing their running gait, I can absolutely understand why running barefoot should not be prescribed for all runners. You simply cannot change what some (if not most) have embedded into their running subconscious. We have been using shoes for hundreds of years now, and the world as we know it is flat. While trail running has become highly popular, a majority of the running races covering all distances are run on paved city streets. This is why we wear shoes, and this is why shoes will never go away.

While many of the elite level runners have the gift of great genetics and a stride that has been perfected over miles and miles of training, a majority of citizen athletes out there do not. They are habitual heel strikers, and they need the cushioning of a running shoe in order to continue their passion for running without injury. As a coach, if you fall into this category of runner, I would recommend that you at least explore the possibilities and maybe slowly integrate barefoot running into your regimen. However, you should not attempt to change your natural running gait overnight.

Initially, all barefoot running should be kept to drill sessions in the park or on a soft surface. Once you become better accustomed, you can progress to running short distances and go out and get those Vibram 5-Fingers™ that you have been eager to buy. Keep in mind that once you get tired, you will regress back to your natural running gait which could be detrimental if done barefoot. So maybe don’t throw the lightweight trainers away quite yet. Keep them around a little longer, just for those high mileage sessions.

Aubrey Curtis is a Level 1 USA Triathlon Coach who works with all levels of triathletes and swimmers of all distances.