The Benefit of Yoga for Cyclists 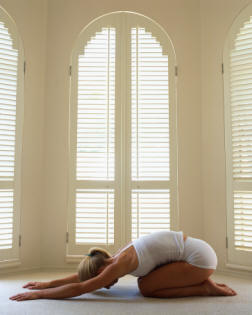 Years of yoga have convinced me of benefits of this 5000 year old practice.  The word yoga derives from the Sanskrit root “yuj” meaning “‘to yoke,” referencing the body-mind union.  The exercise associated with Hatha branch of yoga can lead to improved flexibility, strength, concentration, relaxation, immune response, posture, lung capacity, coordination, balance and confidence.   As a cycling coach, yoga instructor and competitive cyclist, the contribution of yoga practice specific to improved cycling are of particular interest.  There is a yin yang balance to the challenging stresses of cycling and the restorative properties of yoga.  Let’s explore a few of the reasons I encourage my cycling clients to be yoga practitioners as well.

The benefits of enhanced flexibility on the bike provided by regular yoga practice are numerous.  Flexibility is believed to improve performance, reduce risk of injury, improve transport of blood and nutrients to muscles, and reduce muscle soreness.  Athletes are encouraged to stretch after training and competition.  A structured yoga practice, I believe, is more interesting, motivating and effective than simply going through a few passive stretches and yoga contributes so much more to our physical and emotional health.

Controlled breathing (pranayama) is central to yoga practice, facilitating the mind body connection.  As we move through poses (asanas) we inhale deeply to breath length into our spine and fully exhale as we stretch deeper into the pose.  This conscious practice of deep, diaphragmatic breathing is critical to cycling performance.  When pushing through the self induced agony of a time trial or desperately sticking to the wheel in front of me as the field splits on a climb, I remind myself to control my breathing rather than letting it control me.   Both perceived and actual exertion are directly linked to breathing technique. The shallow panting that can naturally occur when one is stressed results in inadequate oxygen, retention of metabolic waste within muscles and fatigue.  This upper-chest breathing can become habitual and unconscious, causing overuse of secondary respiratory muscles such as scalenes, sternocleidomastoid and upper trapezius which exacerbates the problem as we expend energy contracting these augmentory muscles; precious energy that should be going into the pedals.   Working on full inspiration and expiration in the calm setting of yoga practice rehearses the cyclist for the respiratory demands of the road or trail.  In an effort to reach alveoli in the far corners of the respiratory passageways, we should remind ourselves on the mat and in the saddle, to fill the lungs as one fills a glass of water, from the bottom up. 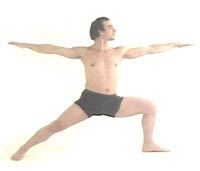 Human movement science describes three planes of motion in biomechanics: sagittal, frontal and transverse which divide the body left/right, front/back and top/bottom, respectively.  Cycling, running and most traditional strength exercises (think bicep curl, bench press, squats) occur predominantly in the sagittal plane, which divides the human body into left and right and involves flexion and extension of joints.  This constant, limited type of joint motion needs to be balanced with movement involving all three planes and full range of motion.  Our overall health and well being depends on more versatile, functional strength and flexibility.  Yoga strengthens and stretches muscles in the frontal plane (think arm or leg side raises) involving adduction and abduction of joints as well as the transverse plane

(swinging a bat) such as spinal twists.  As we practice asanas with equal time spent in left/right versions, yoga also addresses the chronic imbalance in leg strength and coordination; we tend to be one-legged just as we are right or left-handed.   For example, in Warrior II (Virabhadrasana II), we contract the quadriceps (esp. rectus Femoris), calves (gastrocnemius, soleus) and gluteus medius and stretch the gluteus maximus in the front leg.  Simultaneously, the muscles being flexed on the front leg are being lengthened on the rear and those being stretched on the front are contracted on the rear.  As we alternate sides in these poses, we work toward evening out the disparities in both strength and flexibility between our right and left sides. 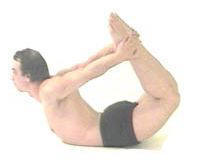 Most cyclists are aware of the role core strength plays in generating power on the bike.   Your chiseled quads and calves may be the envy of the peloton but delivery of leg power to the pedals won’t be as effective without a strong core from which all movement stems.  A strong core makes you a better cyclist but cycling does not make your core stronger.   Some tend to think of the core as just the abdominals and while they are an important subset, some 29 muscles attach to the lumbo-pelvic-hip complex.  In many strength programs, attention to the crucial stabilization system of the core tends to lose out to sexy muscles like biceps and “pecs.”  I long for the day I hear the following conversation from a couple muscle-heads at the gym.  “Dude, let’s work lumbar multifidus today.”  “No way dude, it’s all about the transversospinalis!”  Virtually every yoga pose is core work, strengthening muscles we give no thought to yet are instrumental in movement, balance and stability, like the pelvic floor muscles, transverse abdominis and iliopsoas.

Due to the repetitive nature of pedaling, and constant hip flexion, cyclists tend to have tight hip flexors.  Sitting at a desk much of the day, as most of us do, also contributes to the problem.  Several yoga poses (referred to as “hip openers”) specifically address this imbalance.  A typical yoga practice will help stretch the hip flexors (psoas, TFL) and strengthen the hip extenders (gluteus maximus, Piriformis) which improves comfort and power in the saddle.  Cyclists are “folded” up on the bike for hours at a time.  Back bends such as Bow Pose (Danurasana), Camel Pose (Ustrasana) and my favorite, Upward Facing Dog (Urdhva Mukha Svanasana) reverse and balance the spinal tension created by the fetal position on the bike.

Many cyclists tend to over utilize the quads and under utilize the glutes and hamstrings.  Yoga students are (or should be) constantly encouraged to “hinge” at the hip rather than arching the low back.  For example, when bending forward grasping the foot with one leg extended in Janu Sirsasana, students are asked to think of reaching chin towards shin rather than forehead to knee.  In addition to protecting the back from undue strain on the bike, keeping your low back strong and bending at the hip results in greater recruitment of the glutes and hamstrings, spreading the workload more evenly and encouraging smoother pedaling technique.  This is of particular importance to triathletes who, by increasing the contribution of the glutes and hamstrings during cycling, somewhat “spare” the quads for the run to follow.

If you compete in triathlons, enter individual time trials or spend a lot of time on aero bars in your recreational riding, you are familiar with the burning pain in the neck and upper back from holding your head out horizontally for an extended period.   The head is designed to be supported above the neck and shoulders and using the same muscles in an unaccustomed position can make that 10 pound melon feel like a ton.  The challenging head a neck positions held for extended periods in yoga poses can prepare those same muscles for the task.  I’ve found that practicing yoga strengthens the muscles supporting the head and has allowed me to complete longer time trials in relative comfort.  Warrior III (Virabhadrasana III), for example, requires the yogi to balance on one leg with the rest of the body parallel to the mat.  Arms extended and head up with eyes looking straight ahead, the upper trapezius and levator scapulae, which attach to and support the skull and cervical vertebrae, are strengthened in a manner incomparable to any traditional exercise and in perfect preparation for the demands of an aerodynamic riding position.

Cycling is not generally considered weight-bearing exercise since we are supported by the saddle most of the time.  This is of particular concern to the ever-growing ranks of the masters field.  Those of us riding in the 50+ category expect to see a continuing decline in bone mineral density.  Weight bearing exercise has been shown to slow or even reverse this process.  Supporting your body weight in standing yoga poses like Warrior I & II (Virabhadrasana I & II) work the large bones of the hips and legs while poses like Downward Facing Dog (Adho Mukha Svanasana) work wrists, arms and shoulders and Cobra (Bhujangasana) and Locust (Salabhasana), which work the back muscles, may preserve spinal health.  I believe all cyclists should build strength through periodized weight training in the off season.  Although many respected sports physiologists and coaches recommend weight training year-round for cyclists over 40, I’ve found I simply don’t have the time or energy for the gym on

top of the abundant training and racing during the season.  Yoga provides the strength maintenance needed through the spring and summer months to offset age-related bone and muscle diminishment in addition to many other physiological benefits cited above.  (Also be sure you’re getting enough calcium and Vitamin D, which promotes calcium absorption.)

Strenuous cycling often demands tremendous levels of concentration.   The aspect of yoga I cherish most is the focus we are asked to bring to practice if we are to derive full benefit from it.  As required during a fast twisting descent or surviving the single-file laps of a criterium when you’re stretched to your limit, yoga asks us to “be here now.”  The emails accumulating in your inbox or the overdue term-paper have no place in the meditative mind.  The past has been and the future will come but you can only truly live in the moment and nowhere is that more apparent to me than in yoga and bike racing.

These are just a few of the reason I find yoga to be a wonderful compliment to cycling.  If you already experience what both bring to your training and life, you no doubt could contribute several more of your own.  If you have yet to immerse yourself in all that yoga has to offer, I encourage you to do so.  Your cycling and your life will be better for it.

2 comments on “The Benefit of Yoga for Cyclists”