The Power of a Good Bike Fit 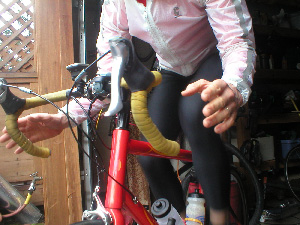 During hard moments in a race, the cyclist experiences different levels of pain in those muscles that power the bike down the road.  This short-term discomfort is inevitable and will vary in intensity at different points during a race.  However, any pain during a ride or shortly thereafter other than in the working muscles is a reason to consider a bike fit.

Prior to coming to me in 2006, one client had a three-year history of right knee pain.  He tried various options to relieve the pain in his right knee, including having it scoped in 2004 and three other bike fits.  Each thing he had tried had provided temporary relief with limited long-term results. While riding with this client, I noticed that he was stretched out too far and his legs weren’t fully extended on the bike and we discussed the benefits of a dynamic bike fit.  Dynamic bike fitting means making adjustments based on observation of the cyclist actually pedaling the bike, rather than on measurements made on a cyclist holding still. Based on my observations, I concluded that his saddle needed to be raised by 10 mm’s and moved aft by 5 mm’s. I raised the bars by flipping the stem to a positive angle, allowing him to look down the road farther with more comfort in his neck and shoulders. Moving the stem and bars to a more appropriate height allows deeper breathing, more supple steering, and less neck fatigue. All of this makes a longer, more comfortable workout possible.

For my client, it appeared that his prior position had caused lasting damage.  The adjustments in the initial bike fit were drastic enough that it could take a week or more for a noticeable improvement in pain during a ride. After the fit, once again the pain had reduced but was not completely gone.  After two months, my client’s attitude worsened and he was very disappointed and discouraged with his continued patella discomfort.

At first, no measurable progress was made.  Interval training was out of the question until the client could complete several consecutive rides without pain. During the winter months we continued to make minor adjustments in millimeter increments, which eventually worked but not quickly. In the mean time, he began to work with an orthopedic surgeon and they decided to do an MRI. The results of the MRI were inconclusive; it showed that there was a possible slight tear on the meniscus, so exploratory surgery was scheduled for two months later.  With additional small position adjustments, my client continued to train and during long rides the pain in his knee was limited and didn’t linger after the rides as it had in the past.  After a few months of building up his physical abilities, his mental confidence climbed as well. His first few races were definitely a time for him to find his racing legs, but after that he continued to place in the top 10 and canceled his surgery.

For a large segment of the riding population, repeated adjustments will be required to find the optimal position, so persistence can be a necessary part of bike fitting.  Pains in joints or body parts other than the working muscles, and those aches and pains that persist long after the ride, for the most part, are unacceptable.  So if you find yourself dealing with a persistent pain, look for a bike-fitting professional who will take into consideration other factors including riding style, biomechanical imbalances, physical differences between limbs, flexibility level and type of riding – road, mountain or triathlon.  If pain doesn’t show improvement or shows up independent of riding, it may not be solely a bike fit problem and a medical specialist should assist in finding a resolution.

View Coaches who do bike fit