↓ Skip to Main Content
Home › Performance Tips › Training Tips: Save Your Matches in a Criterium

Training Tips: Save Your Matches in a Criterium

Many riders are under the impression that successful criterium riding is all about repeated explosive accelerations. Nothing could be farther from the truth, at least if you want to win. In fact, the most successful crit racers minimize accelerations, doing as few of them as possible and making them as small as possible, consistent with getting to the end of the race with the front group. There are a whole slew of tricks that make that possible. Here are a few of them: 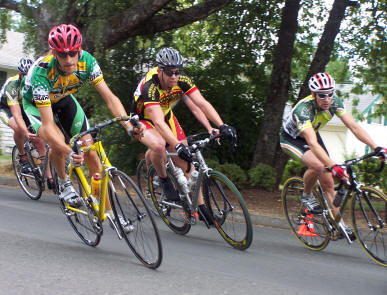 1) Always be aware of the gaps rather than the riders. Rather than watching the wheels around you, watch the spaces, which allows you to obey the next rule,

2) As you approach a corner, look for a gap to roll into (might be off the outside) as the riders around you slow for the corner. Then start your effort a little before them so you rejoin the flow having spread your effort out. Avoid braking if possible, you’ll just have to put any lost energy back into the bike a moment later.

3) When riders are sprinting near you, accelerate firmly but not sprinting. Let a few riders pass you. Then you’ll be a few positions back, but have avoided burning a match. Now you can pass people on the rest of the course rather than having to recover.

4) Only go all out if you must do so to avoid going off the back or to compete in a sprint. Otherwise, controlled effort is the name of the game.

5) If people are cutting in in front of you, accelerate. If you keep making spaces for people to pull into, soon you are at the back of the pack.

6) In a hilly crit, the pack will fan out suddenly at the bottom of the hill. Riders in the second and later rows will be braking. Plan to go wide and pass them as they slow down.

7) Keep your elbows out a bit. If you pull them in, your neighbors will take advantage of the space you’ve given up and you’ll want to pull them in more, so keep them out.

8) Do practice crits. They are your principle opportunity to do this stuff without paying a big entry fee or driving a long distance.