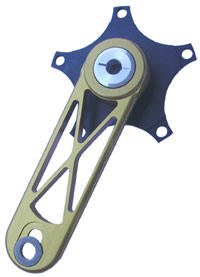 With so many electronic gadgets out there to help you get faster I thought it would be interesting to write about a totally un-electronic product I have been using over the past few months in my training. They are called PowerCranks and no, they have nothing to do with measuring power output.

PowerCranks are designed to fix a simple problem – the fact that most cyclists only apply power to the pedals during the down stroke, when the crank arm is between 2 and 5 o’clock. In fact, many cyclists go one step worse, and actually weight the pedal when the arm is between 7 and ten o’clock, forcing the other leg to lift the foot. They quite literally use one leg to make the other leg work harder.

PowerCranks have a clutch mechanism in each crank arm which is analogous to the freewheel on a hub – it allows the BB spindle to rotate forward while the crank stays still (analogous to your wheel rotating while the cassette stays still). So the right crank arm cannot be brought to the top of the stroke by the downward motion of the left arm – it has to be pulled all the way around by the right leg, and the same applies to the left crank arm. The arms only stay 180 degrees apart when the rider keeps them that way.

One of the distinguishing traits of how elite cyclists ride is that they fully unweight the pedal during the upstroke, and apply power through the upstroke when accelerating or climbing at a low cadence. PowerCranks impose that type of form on any cyclist through the mechanical design.

My first few rides on PowerCranks were real eye openers – after 5-8 minutes of riding at a moderate pace, I was hunched over the handlebars, both feet stopped dead at the bottom of the stroke, and my pulse at 120. This was interesting, as I can climb for up to an hour with my pulse at 168.

The reason for my grinding to a halt is that PowerCranks force a couple of key muscles to step up to the plate and do some work – namely the hip flexors. This is the muscle that you use to lift your femur. Imagine standing up straight and holding your femur level with the ground – the hip flexor is the one keeping it in place. This muscle ought to help lift the pedal through the back of the pedal stroke but because normal cranks are connected, it often gets a free ride. PowerCranks force it into action.

Initially I found it much easier to ride at lower cadence. Just getting the muscles to fire fast enough to hold 90 rpm was almost impossible early on, and in fact on my first ride I found that I could only maintain about 60 rpm for more than a few minutes. Over several months I have been able to increase my cadence but I am still not able to sit at 90 rpm for hours at a time. It is more like 5-10 minutes at a time. Then I need a break.

In short, riding with PowerCranks is no fun for the first month or two. I’ll go so far as to say it is a real drag. I work harder, go slower, and generally frustrate myself trying to accomplish what I once did with apparent ease.

So why train with something that is so frustrating? PowerCranks are useful because they force me to change the way I pedal. Unlike a power meter or HRM, I do not have the option of ignoring them. I either pedal circles or coast to a stop. That kind of immediate feedback is hard to get, but PowerCranks deliver it by the truckload. With a full-time corporate job, a newborn at home, and a home business on the side, I need to wring as much value as I can out of each minute on the bike. After 18 years of riding & racing, many of those spent training consistently with rollers and doing isolated leg work, the PowerCranks still find chinks in my pedal stroke.

I am still in the data gathering phase after 3 months on the PowerCranks. My overall sensations on the bike after using the cranks have me convinced. The proof will be in the pudding on race day in early October.

There are some downsides to PowerCranks, almost all of them logistical. They are not cheap, although they cost less than almost all of the power meters on the market (which I’m convinced few people really know how to take advantage of, but that’s another story). They can be dangerous in certain tricky situations, like group rides or traffic, so I’d recommend at least a few weeks of using them on an indoor trainer before venturing out onto the road. It is really hard to stand on them, and getting clipped in and accelerated in traffic takes some practice. PowerCranks are available with a lockout option, to make them function like a normal crank if you want that flexibility.

There are several physiological factors to consider as well. I did not experience this myself but have heard of others experiencing nausea when getting accustomed to the cranks. Apparently the asymmetric feedback that your body gets from PowerCranks causes some people to feel sick to their stomach the first few rides. It seems to go away without too much time but if you choose to get a set, heads up.

Finally, it can be argued that because you must lift the crank on a PowerCrank, you are actually overtraining the hip flexor relative to what it should be doing at steady state, which is merely unweighting the pedal. While this may be true, I think that learning to let a muscle relax will be easier once it is strong than trying to make it strong in the first place. And remember when accelerating or climbing at low cadence, you should be pulling up on the pedal. Especially in mountain bike races, the ability to generate power through the backstroke is critical (part of why pro MTB racers test out as having the roundest pedal strokes). In total I think this is a very minor drawback of the PowerCranks and should not change your decision one way or the other on whether to train with them.

For racers only one thing matters – will PowerCranks make you faster? Unless they are already expert and consistent at unweighting the rear pedal during steady pedaling and pulling up during low cadence work and hard acceleration, it is hard for me to imagine that there is anyone out there who would not benefit from PowerCranks. A number of top pros have reached the same conclusion, and train with PowerCranks. Of course they are still being beaten by other pros who don’t use them, and beating other pros who don’t use them. If nothing else, PowerCranks add variety and interest to off-season workouts. I look forward to reporting back after my next 24 hour MTB race in October.