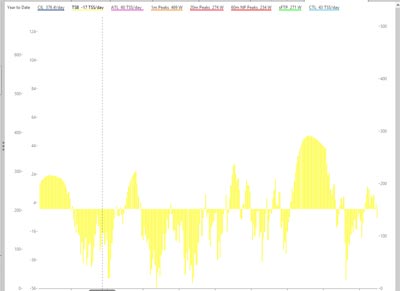 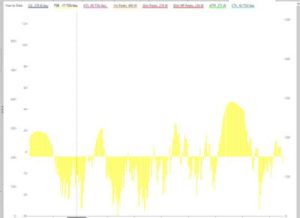 Peaking is a cyclist’s nirvana. If training has gone well, you are strong on the bike, riding fast with little effort, recovering quickly enough to attack several times in a race or race several days per week and your head is 100 percent in the game. Race results are personal bests. If the timing is right, the peak occurs for particularly important races. When you are peaking, you feel like you could race week after week, always doing better and better. Unfortunately, troughs follow peaks. Reaching a peak requires specific types of training and that training must change once you use your peak in races.

Metaphorically, training makes deposits at the fitness bank while racing makes withdrawals. After enough racing your account is overdrawn, and you fall into a performance trough. Psychologically, being on the road and racing hard every weekend is draining, especially if results don’t match expectations. Training volume necessarily drops as intensity increases, so fitness eventually fades. Attempting to maintain volume along with hard racing leads to overtraining, ending the peak. Most riders will be in optimum form for roughly six to ten weeks. The duration of peak fitness can vary, but it certainly doesn’t last forever and a seasonal plan that reflects this can extend a season or even a career.

Following a peak, you start to slow down. You don’t race as well or get the same joy from riding. You can push and do a few more races on the back side of your peak, but if you drag that out too long, you’ll end up emotionally and physically burned out in a way that takes months or years to correct. It’s important to recognize when peaks are ending and to adjust your training appropriately.

What you do after a peak determines how deep the ensuing trough will be. Many riders make the mistake of thinking that their new weakness indicates a need for more volume or intensity. As a result, they dig a deep hole. Others keep competing because they feel the need to keep up with their racing buddies. These riders can still go to races and support friends, but should not enter. Though it may be difficult, stand on the sidelines and cheer for your buddies instead. Help prepare bikes, hold places in registration and bathroom lines, pack up the trainers after the team goes to the line, provide feeds and play team manager rather than exhaust yourself in a race for which you don’t have the form. You’ll do more for the team and maybe earn some reciprocal support that you can call on when you are racing again.

Failure to recognize the end of a peak can mess with your head. You may mistakenly think that you don’t have what it takes to race any more. Riders in that situation often quit when they really need to take a break or, depending on seasonal timing, to hang up the race bike until it’s time to start training for next year.

A peak has passed when your racing performance dips from prior weeks, and a few rest days doesn’t bring you around again. Accelerations will be a bit slower, and legs will feel heavy or sore more frequently. Your sustained pace will be down or hurt a bit more to maintain. Your heart rate will not rise as easily, and your recovery will be slower. Novice racers often wait until their peak is well past its “pull-by” date to make adjustments. They waste additional entry fees and gas money hoping to come around and have another good race. In extreme cases they don’t hang it up until they are sick or overtrained.

Experienced riders develop a sense of the duration of their peaks and when they are ending. They build this information into their seasonal racing plans. If you peaked for eight weeks last season, you can guess you’ll peak for maybe seven to ten weeks this year. Set up your plan so you start peaking for the first important races, and also schedule a rebuild to start when, or just before, the first peak ends. You can accelerate your rebuild if you take your break while you are still strong rather than waiting until you are exhausted. If you know that you typically peak for eight weeks, you might plan to start your rebuild after a six or seven-week season rather than anything longer.

After the main peak of the year, you can rebuild fitness for an additional peak or peaks. The rebuild process is generally a shortened recapitulation of your off season training program. You’ll start with a few days to a few weeks of rest, followed by some base training. After that, start your transition to increased intensity and finally resume competition. The amount of time devoted to each phase of the rebuild will depend on how much time you have available before your races, but that doesn’t mean you can compress your rebuild infinitely. Generally, the shorter your rebuild is, the shorter the next peak will be. Riders differ of course, but as a starting expectation for those who have not set up a two-peak season before, a three-week rebuild gets you one or two more good racing weeks while a two-month rebuild might get you thee or four more good weeks.

When you are planning your season, try to identify the most important races on the calendar. Can you put them under one or two peak umbrellas of realistic length, with a realistic amount of rebuild time in between? It is possible to peak three times in a racing year, if you can accept short peaks.

To achieve peak form for road racing and criteriums, you must train close to race intensity for a few weeks. You can do that in training or at real races, but either way you have to actually train the energy systems that will be used in racing. Most riders find that it takes between two and six weeks of racing, or similarly hard training, to bring on a peak. Once the hard riding starts, the clock is ticking down to the end of the peak. When you start weekly or more frequent race-like riding, the end of the peak is eight to 16 weeks away. It takes two to six weeks to get to the peak, and then six to ten for the peak itself if you keep doing hard rides and races every week.

Some riders can extend a peak once it is achieved by skipping races some weeks and doing longer base rides instead. Others will find that the clock inevitably counts down once the racing starts. Peak duration is something you and your coach will have to experiment with. Very strong riders who can win races without getting particularly tired can actually turn in winning performances weekly for several months, but that doesn’t mean that they are actually peaking for that whole time.

Bike racing is full of what I call “threshold phenomena.” There are numerous situations where you can’t tell that you are about to have a breakthrough or reach a new level until you do. Many riders mistakenly think they don’t have the power to win crits and are going to need months of training, when in fact a relatively minor tweak to their bike handling or tactics could do the job. Regardless of whether you have 50 percent or 99 percent of the power needed to keep up, you watch the pack roll away. If you have 99%,however, a tiny improvement in fitness makes all the difference. Taking a long non-riding break between seasons makes it harder to get stronger from year to year and makes it less likely that you’ll pass those key thresholds.

Taking a long break from aerobic exercise between seasons means starting the next season at a disadvantage. If you are ending one race year too early to start training for the next, stay active on the bike or with some form of aerobic cross training. Ride centuries, take some non-racer friends riding, do a bike tour or learn to ride a mountain bike. Stay motivated and active until it is time to really train again. Aim to have roughly one month of rest between racing and training, in order to maximize year-to-year gains.

Pay attention to the ebb and flow of your fitness through each training and racing year. By recognizing when you peak and accepting when your peak ends, you can plan for that repeating pattern in future seasons. Avoid training and racing when you are off your peak or in the next fitness trough so you can keep the trough shallow and move on quickly to productive resting, training and racing. If you are careful to not dig a training hole, you can get more racing into a year, enjoy the racing more more, suffer less and ultimately make more progress from season to season.