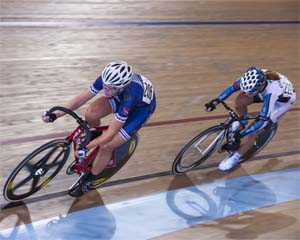 Although not everyone has a velodrome located nearby, almost every cyclist can benefit from the skills that are gained from racing and training on the track. Velodrome track racing is a unique sport in which the bikes are different and each type of event requires certain technical skills. For those who are focused on the road or mountain bike, a track oriented approach to cycling can be a great benefit.

Track bicycles are elegant in their simplicity. They have a single chain ring and cog, no brake calipers (or levers), and no freewheel mechanism – meaning that one cannot coast on a track bike. Regardless of how fast one is traveling one has the same, single gear ratio. As a result track gears must be carefully selected before the event based upon the type of race, the conditions, and one’s fitness level; even the width of one’s tires are considered when selecting a gear combination. Because changes in speed have to be made by altering cadence, track cycling forces one to be efficient through a wide range of cadences. Among elite-level track cyclists, cadences in a final sprint often exceed 180 revolutions per minute. These high cadences demand a high level of neuromuscular efficiency, and translate to excellent pedaling technique when one goes back to a geared bicycle.

Unlike a road bike with front and rear caliper brakes, or a department store bike with a coaster brake, a track bicycle has no actual mechanism for stopping. Despite this apparent hazard, a velodrome is actually one of the safest venues to ride.

A rider has two primary means of slowing down while on the track; pulling out of the slipstream of the rider whom they are following will slow a rider down to a degree, but the second, and more effective way one can slow down a fixed gear bicycle on a track, is to move up the track’s banking. Like any short, steep “hill,” riding up the steep banking of a track will slow down the bicycle. The cool thing about going “up track” to lose speed is that the rider can get that speed back later by moving back down again at a tactically advantageous time. When one is racing only amongst others with the same tools of speed regulation, the fact that there are no “brakes” on a track bicycle is of very little significance. Because no one on the track has brakes, no one can suddenly slow. It is this uniformity, along with the closed and protected course, that actually makes track racing rather safe, despite the prima facie danger of racing bicycles at forty-five miles an hour “without brakes.”

Just like road time-trial bikes, track bicycles that are used in timed events on the track, such as the individual and team pursuit, are allowed to have upturned aero bar extensions. On an indoor velodrome most track cyclists will use a rear disk wheel and for some events a front disk wheel as well.

Because of the higher cadences required for track cycling, the setup of one’s track bicycle will tend to be rotated forward relative to one’s position on their road bike. This is because of the fact that when a saddle is positioned with more setback, it will engage one’s hamstrings to a greater degree, and increase the angle of compression of the hip. This increased compression detracts from peak cadences. A traditional road position, with a saddle setback usually falling anywhere from 6 – 10 centimeters behind the bottom bracket, will tend to make the higher cadences and peak wattages that are necessary for the velodrome more difficult to achieve.

Track cycling is divided into events that fall into either the “sprint” or “endurance” categories. These events range from the 200 meter sprint, a distance that at the elite level is covered in about 10 seconds, to Madison, a mass start relay event where a team of two riders each take turns slinging one another down the track into the race and which lasts in excess of an hour.

With events as diverse as these, there is a place for almost every disposition and body type. Riders who succeed in sprint events often look like bodybuilders on bicycles, while most top level endurance riders are more slightly built, and often make their living as professional road riders for much of the year.

Endurance track riders actually spend very little of their time on the track, and instead spend much of the spring and summer months racing on the road in order to develop the aerobic base necessary for the longer endurance track events. Successful endurance track riders typically rely upon their sprinting ability on the road, and are capable of producing high wattage levels for the final laps of a criterium or final miles of a road race.

The endurance track events include the pursuit, a timed race where riders start opposite one another on the track; the team pursuit, an event where two teams of four start opposite one another, exchanging the lead every lap or half lap; the points race, a race where sprints are contested throughout for points and the winner is the rider who has accrued the greatest number of points; and the Madison, an event much like a points race but contested with a partner.

Although not all endurance track riders become household names as road cyclists, many do. There are numerous professional road riders who started their careers as endurance track cyclists and have gone on to be successful road sprinters and time trial/ prologue specialists. Professionals like Bradley McGee, Stuart O’Grady, Bradley Wiggins and Mark Cavendish were all part of their country’s national team track programs, and successful endurance track athletes before becoming part of Pro Tour road teams.

From the track these road stars brought a tolerance for riding at very high intensity, an ability to ride in close quarters, and a high degree of neuromuscular efficiency. As a developmental tool, the track is exceptionally effective as it ensures that fundamentals of cycling (applicable to any discipline) are learned exceptionally well.

In contrast to the road miles necessary for endurance events, track sprinters rely almost solely upon power and speed for their events. Track sprint events include the matched sprints, team sprint, keirin and kilometer time trial. Track sprinters have both exceptional leg speed, and exceptional peak power. A top level track sprinter produces over 2,000 watts at peak power. Contrast this to the 1,500 or so peak watts produced by a European professional road sprinter of average build, or an endurance track rider, and one can quickly see what a specialized discipline track sprinting is. In order to develop this power track sprinters typically train extensively in the gym and on the velodrome, rarely doing road rides that exceed three hours.

Although most do not have the desire or physiology to compete in track sprint events, focusing on these events should be considered by those who are naturally mesomorphic or who come from other power based sports such as track and field or weight lifting. All too often I have seen individuals hungry for success, focus on an event that does not suit their basic physiology, all the while unaware of the diversity of cycling events that exist.

Not everyone has the European professional road cyclist ideal of exceptionally high VO2 Max, the ability to recover from multiple hard days of consecutive racing and a power to weight ratio conducive to climbing alpine passes. Track events, in particular sprint events, offer another cycling venue that rewards different physiological abilities and mental predilections.

What can I learn from track cyclists that will help me?

Understanding the training that is commonly employed by track cyclists can greatly help those cyclists who are focused on developing themselves as road, cyclo-cross or mountain bike athletes. Although it is commonly employed in order to develop sprinting power, riding a fixed gear bicycle whether on the track, or on the road with brakes, can greatly increase one’s level of efficiency. The cadence demands of riding downhill on a fixed gear, or sprinting on the track, will increase one’s pedaling efficiency and these benefits will carry over to one’s primary discipline.

But it is not just the higher cadences that make fixed gear riding beneficial, those could be obtained from high-cadence exercises on a free-wheel road bike, it is also the fact that the direct drive of a track bike forces one to follow a smooth, constant application of power at those increased cadences. This results not just in the ability to ride at increased cadences, but also in the ability to smoothly apply power across the spectrum of cadences. (Note that the benefits of fixed gear riding come from applying force to the pedals at higher cadence, not from having the pedals drive the legs around. When the pedals drive the legs, injuries often follow. )

Track racing can also be a great deal of help for those who are insecure racing in the close quarters of a criterium. Because of the style of track racing, and the limited width of a velodrome, shoulder to shoulder contact is frequent, and those who have experienced contact while racing on the track are more apt to be comfortable with it when it takes place on the road.

More nebulous, but still critical, is the knowledge of how hard one can exert one’s self on a bicycle. Track races, be they timed or mass start, are short, intense and often won by tenths or even mere hundredths of a second. From a physiological perspective this certainly has huge benefits in terms of peak power, and lactate power, but it also has huge psychological benefits. One is able to mentally draw on these experiences of exceptional exertion during the closing laps of a criterium, or the end of a road race and this knowledge of the intensity that can be achieved can frequently be the difference between winning and losing.

I suggest that a road, MTB or CX racer who lives close enough to a track to make regular visits realistic speak with his or her coach about how to incorporate track time in his or her training plan. Velodrome riding is also just plain fun enough to make the track a travel destination for riders not lucky enough to live near a track.