↓ Skip to Main Content
Home › Athlete Perspective › What It Takes to Run an Ultra-Marathon: An Interview with WC Athlete Henry Slocum

What It Takes to Run an Ultra-Marathon: An Interview with WC Athlete Henry Slocum 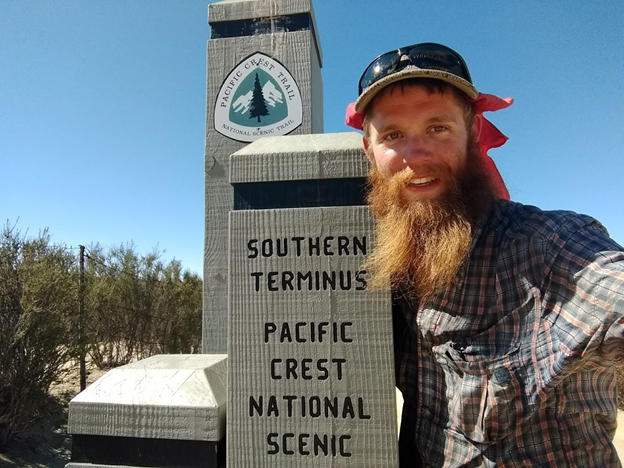 Ever wonder what it really takes to run an ultra-marathon and push far past the limits that you have imagined for yourself? Getting into ultra-marathon is a bumpy process, rife with pitfalls and setbacks. There are many details which can derail an ultra-marathon effort or lead to serious injury. One learns from each event and makes adjustments before the next one. We hope this article will help new racers learn quickly enough that racing becomes tolerable before they quit in pain or frustration. Some of the lessons of ultra-running will apply to shorter races and other endurance sports as well.

Wenzel Coaching client Henry Slocum of Minneapolis, MN is a seasoned through-hiker and ultra-endurance gravel-bike racer who has focused on running 100-mile races for the last several years. We chatted with Henry about his ultrarunning endeavors after he completed the Black Hills 100 Miler in South Dakota. Even as a seasoned endurance athlete, Henry still learns new insights and progresses with each event he enters. He works with Coach Adrian Bennett and refines his approach race by race, improving his strategies for mental toughness, fueling, pacing, injury prevention, and more.

If you are drawn by the lure of ultra-racing like Henry, get ready to be humbled! See what you can learn from Henry’s insights and field experience. There will still be plenty of lessons to learn the hard way.

Originally from Boxborough, MA, Henry is a mechanic and co-owner of the Hub Bike Co-op in Minneapolis, MN and enjoys gardening, puzzles, and reading sci-fi and fantasy books when not working, training or racing.

Wenzel Coaching: Jumping right into the nitty gritty of ultra running. How have you refined your operations strategy for executing these runs? What methods and systems worked well for you at Black Hills?

Henry Slocum: I’ve learned the importance of maximizing variety and opportunities for intervention on long runs. Wherever I have a drop bag, they are always packed with dry socks, clothing options, body lube, and all sorts of sweet & salty snacks that I can carry. It is impossible to predict when you might need to change your nutrition or equipment to get through a rough patch. I hardly touched my backup candy at Black Hills, but I thought about it several times and felt comfortable knowing I had a reliable source of calories if my more holistic nutrition options started failing. 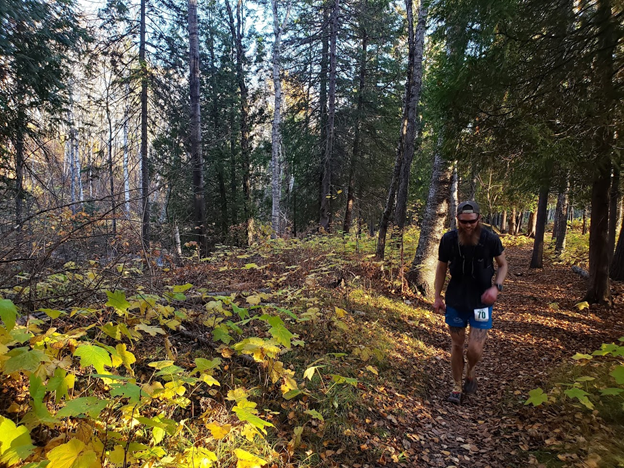 WC: Great point. You never know what crisis might create the need for intervention, so be prepared for as many as possible, as often as possible. I love the “backup candy” concept. Will you tell us more about fueling strategies you have discovered as an ultra athlete?

HS: Eat a LOT early on, before you ever get hungry. Food fatigue is a problem for me later in races, so I’ve learned to put down as many calories as I can tolerate. This helps my energy levels be as topped off as possible when I need to start evaluating alternative sources of calories. At the Black Hills 100, I drank an Ensure (meal replacement shake) at each drop bag point, which turned out to be a great strategy for quick and reliable energy, even in the last few hours of the race. This one might not be for everyone, but I really love eating cheese in the middle of a race, whether running or riding. I love the salty flavor and the texture is a nice change from the more traditional endurance fuels.

WC: Cheese, huh? Athletes and readers, please don’t emulate Henry without doing your own trials before racing! This is testimony to the unique fueling strategies that can work for particular folks. Don’t be afraid to think outside the box. Even when you have your nutrition dialed, you must have low-energy times in your races. How do you push through the inevitable lows that come with events of this duration?

HS: I talk out loud a lot when my brain starts going downhill. Hearing my voice reminds me that I’m in control of the situation. I also like to periodically shout in the middle of the night- it’s sort of like a deep breathing exercise! Adding, “It never always keeps getting worse” to your string of mantras is also an important reminder to be compassionate with yourself- the lows will always come, and you will always work through them. 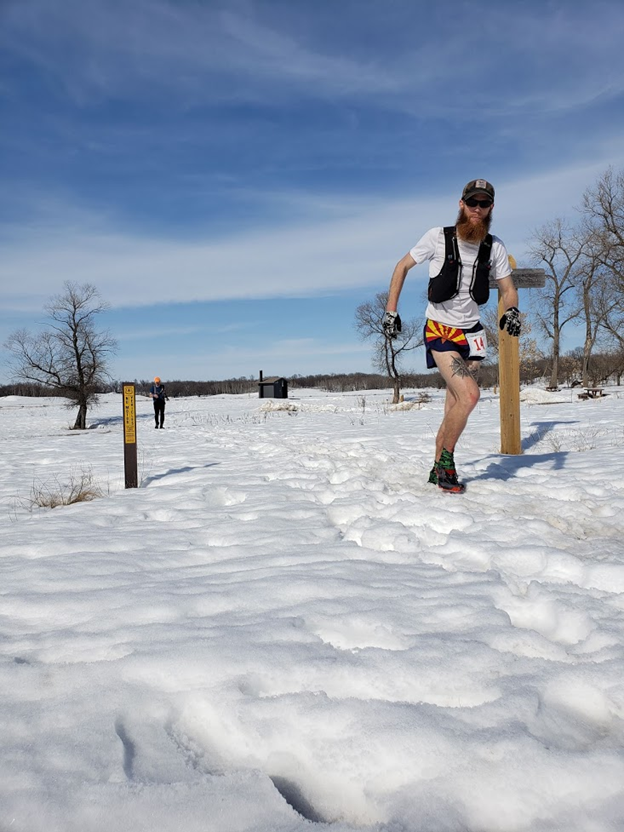 WC: Those are great insights. Can you really talk yourself through whatever the day throws at you? What about soreness and injury?

HS: When I started seeing a physical therapist for an injury prevention program, everything we did was focused around re-training my brain and muscles for better running form. Within weeks I noticed I was recovering more quickly from big workouts, and I could actually feel the improvement in my overall running economy. Even more than the specific exercises she prescribed me, learning about how certain form deficiencies created strain on some of my troublesome body parts has made me a more complete runner. Strength and endurance are great, but if your form breaks down during a race, you’ll hurt a lot more at the finish and have a much harder time recovering from the effort.

WC: So the PT was about running form as much as about strength training to avoid injuries. Is knowing and sticking to your good form enough to get you safely through a 100-mile race?

HS: Before the start of my first 100 mile run, an ultrarunning veteran told me “You should start out feeling like a caged animal. If you don’t, you’re going too fast.” That image has stuck with me and been really helpful in thinking about a conservative-enough pace early on. If I think I’m going slow enough, but not too slow, then I probably need to slow down! The cool thing about running 100 miles is that there is so much time later on in the race to make up ground if you somehow managed to actually go too slow at the start. But if you go out too fast, it can be a long, painful limp to the finish without the ability to recover your legs once they’re smoked.

WC: So setting a good pace for yourself helps you avoid injury. Some people I know (ahem) have trouble controlling their effort early in a race. They get excited and start too hard, even if they plan not to. Any suggestions?

HS: In the first mile of the Black Hills 100, I found some people whose pace was (to me) frustratingly slow, and forced myself to stick behind them. It was only after 10 miles that I trusted myself to set my own responsibly slow pace. From there, a friend and I set a conservative pace with the aim of just feeling warmed up at the halfway point. Because of that, I was actually able to race the last 50 miles, resulting in a second half that was just 11 minutes slower than the first half. 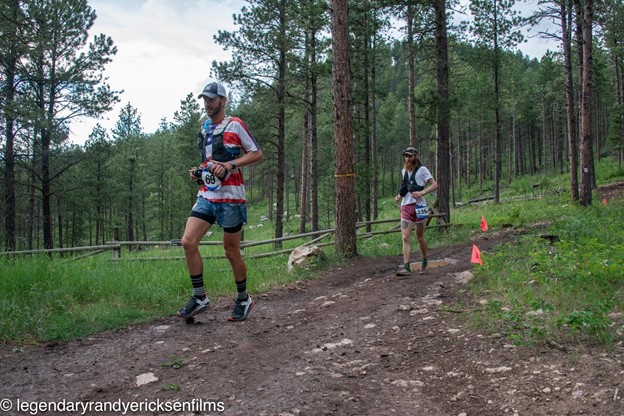 Henry trails his friend and training partner Brian during the Black Hills 100.

WC: For a 100 mile run, that’s a pretty clean split! Still, you had to know to get behind those people. Was hearing the “caged animal” pacing concept enough to get you there, or were there other experiences that made you aware of the importance of pacing or helped you curb your excitement early in the Black Hills race?

HS: The two that stick out in my mind are completing a thru-hike of the Appalachian Trail, and finishing my first DAMn (the Day Across Minnesota, a 240 mile gravel race from South Dakota to Wisconsin). These were both huge challenges that I went into entirely unsure if I could complete, so finishing them was such an awesome feeling!

WC: You’ve done a lot of hard events. The bar for something you’re “unsure if you could complete” must be getting pretty high! What is your motivation to train and compete? What keeps you coming back to the process?

HS: I love being in motion. Race days are an opportunity to travel far under my own power, but it’s the training for those big days that allows me to spend at least a little time each day in motion.

WC: That’s a wonderfully grounded answer. I like how it is as much about the process as the goals. It sounds like the sort of thing you would figure out after spending a lot of time with yourself. Are there things you learned from others, maybe your coach?

HS: The best thing for me about working with a coach has been really learning the importance and value of thorough recovery. I don’t have much trouble finding motivation to train, so a lot of my coaching has been about enforcing days off and gentle activities that help me be aware of the condition of my body. 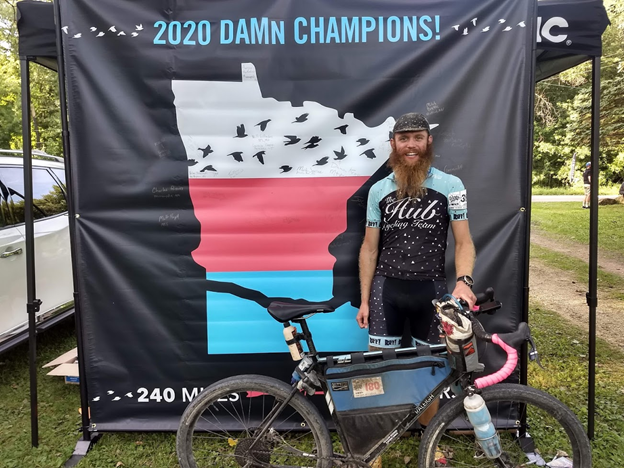 Henry after 240 miles of Minnesota gravel roads, Day Across Minnesota 2020.

WC: That’s interesting. I think a lot of people think “coach” and remember the high-school PE teacher who tried to embarrass the laziness out of the less-athletically inclined students. I don’t think most people would think of “learning to recover” as a high-ranking reason to collaborate with a coach, but in my practice I have found it a common and important one. Recovery is at least as important as training for athletic success, though I suppose it depends on your definition of success. If you just want, “a good workout”, and don’t care about improving performance, it doesn’t matter so much how well you recover. How do you define success in your athletic endeavors?

HS: Success comes down to three things: 1) Lots of smiling! 2) Giving everything I have on that given day. 3) Coming out the other side without having done long-term damage to myself. No single training block or race is important enough to keep me from being able to perform the next time!

WC: I like the way that #2 and #3 balance each other. A lot of people DNF in the races you do. Are you competitive? How much are you thinking about the other runners on the course?

HS: One mantra that has stuck with me from multiple thru-hikes is “The only way out is forward.” Before a race I like to remind myself that it’s just me out there- that’s who did the training, and that’s who is going to cross the finish line however many hours from now, no matter what happens or who else might be on the course. 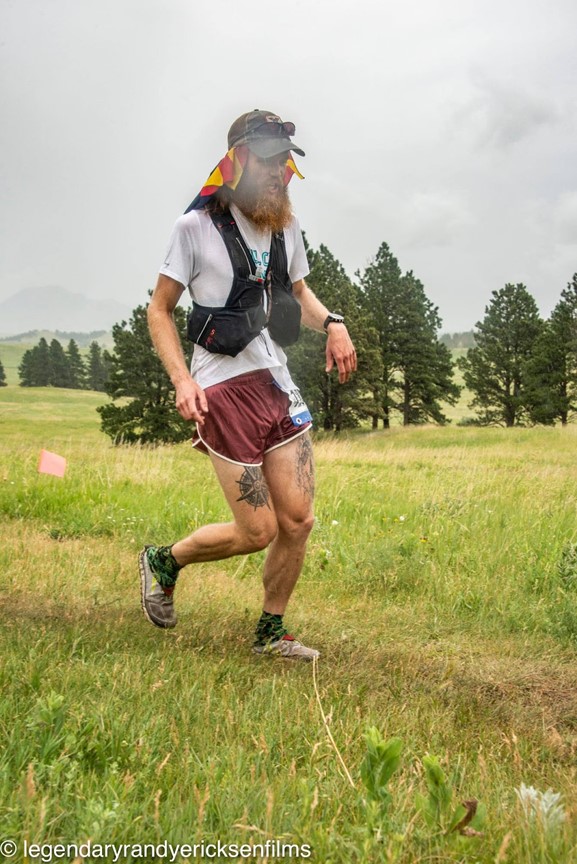 WC: That’s a great thing to keep at the top of your mind. You did the work, you know yourself, you are in control. Is there anything else you’d like to share during this moment in the spotlight?

HS: While collecting data on your training (HR, power, elevation, etc) is helpful in gauging how technically effective your training is, the big question I ask myself after every workout is: “Did you enjoy it?” If I didn’t, I start looking for the reasons why so I can correct them and get back to having fun doing what I love!

WC: That’s a great note to close on. Thanks, Henry!