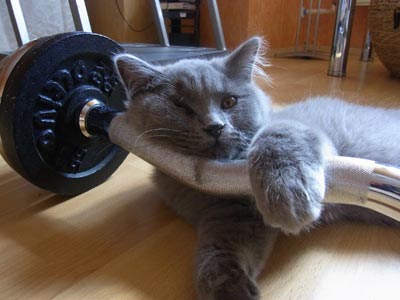 Cold, wet weather in late fall drives athletes indoors, making it easy to decide when to start weight training. Knowing when to end regular lifting in the late winter or spring can be more of a challenge.

Following a weight-training program designed for cyclists can help you move to new levels in your racing, but the accompanying muscle fatigue and damage can be significant. The body needs time to recover before y0u will experience the benefits of lifting. Because the damage and fatigue have a negative impact on immediate performance, the timing of reducing lifting or ending it will depend upon the dates of your racing goals. The feeling of heavy legs during the winter when lifting 2-3 times per week isn’t something you want to experience in an important, early season race.

Understanding the Effects of Consistent Lifting on Near-Term Performance

While soreness from lifting typically lasts less than a week, studies of muscle biopsies have shown that muscle damage from consistent, demanding weight training often lasts closer to three weeks.  Continuing to lift consistently while doing more intense, competitive riding will nearly always result in difficulty keeping up when the pace the group goes near your threshold because of the microscopic muscle damage that is immediate (and an important part of the lifting). Lifting consistently may also mean your are sometimes too tired to even reach threshold. Your threshold power will likely be lower compared to in-season numbers. (If you are comparing thresholds from season to season, compare to threshold at the same period last year — not to your highest in-season threshold.)

Lifting may also have you feeling as though your legs have no “snap” –  the ability to make repeated strong, swift jumps or spin efficiently at sprinting cadences. Though lifting builds strength, it will take weeks before that can translate to power.

Although weight training can be made to mimic portions of cycling’s range of motion, it is still not cycling; the speed of lifting is slower than that of pedaling. For example, lifting at even at a 1.5 second count (.5 second up, 1 second down) for each repetition produces only 40 reps per minute, which is far below the cadence that efficient cyclists average actually ride. When you have spent the winter months training your legs at the rough equivalent of 40 rpm, there will be a transition period during which you re-adapt to the faster leg speed at high power. This is mainly a neurological matter, and the conversion of strength from the weight room to the bike won’t result in a great deal of lost strength.

Train for Racing, Not for Training

When it comes to phasing out weight training, keep your eyes on the line. In other words, unless your goal is to win early-season races, time the phase out based on the races that actually have finish lines, and don’t get wrapped up in dropping your weight training too early in order to “win” late-winter training rides.

You will feel lousy, especially when climbing, during your more intense rides or first races of the season if you are still lifting or have just discontinued lifting. Don’t assume that the weight training you put in over the winter should have been traded for interval sessions the first time you falter in an early-season race. Your legs will come around soon enough. The snap you are accustomed to having in the summer months will come back within weeks with speed training and the accelerations of racing.

Most coaches and trainers agree that endurance racers need three to six weeks away from consistent weight training before they can perform at their desired level in an “A” priority event. (Track sprinters are another story.) Coming into excellent racing form requires not just ending the lifting but also several weeks of racing. Someone who wants to perform right away in the racing season will end lifting earlier than someone who wants to start truly performing eight weeks into the season.

I usually suggest ending full body lifting about two weeks out from the first race that you want to start to feel more like your racing self on the bike. For instance, if you wanted to be going well by early May and you had two early season races in mid March but didn’t really care about how you felt in any race until the beginning of April, I’d have you lift until two weeks before the early April race. If you are slow to recover in general, just upgraded a category, or have a super busy schedule aside from racing and training, I’d have you stop three weeks before that first race where you want to feel decent. The transition period of two to three weeks would give you some recovery from the lifting while you concentrate on intensity and strength on the bike. You’d likely feel better and better on the bike as the weeks go on.

Someone who wanted to perform immediately at a race-season opener in the first weekend of April but didn’t have racing to do before then would stop full body lifting in early March and then transition with on-bike strength and race simulation through group rides, self-timed time trials and other intense work.

If your priority races don’t happen until much later in the season but you are committed to doing early races, you may consider lifting even further into the season to take advantage of strength gains closer to your peak events.  You can use the early races to support teammates or practice race survival skills when you aren’t feeling your best. A later weight training termination date may mean setting the ego aside for more weeks of racing. Still, if you recover well, you may find yourself feeling pretty good on the bike after several weeks of racing, even though you are still lifting as much as twice per week. Beware, however: the fatigue can sneak up on you, so be diligent in monitoring and making the most of your recovery time.

Not everyone responds the same to recovery from lifting. Look at your training journals from previous years. When did you stop lifting, when were your first races, and when did you start to feel good on the bike again? A more experienced or talented rider who is doing local races may be able to continue lifting later into the season than newer, more challenged riders. Your coach or club mentors should be able to help you find the best way to make this transition with the terrain and training time you have available.

After Putting Down the Weights

Once you are ready to move away from regular lifting, you have the choice of going cold turkey  or continuing with a once-a-week maintenance session. If you recover quickly from weight-training sessions and enjoy your gym time, a maintenance session made up of your main exercises from the winter can be a rewarding way to keep up your strength throughout the season. Maintenance work in the weight room doesn’t have to be fatiguing to be beneficial. For those who don’t carry upper-body bulk, continuing to perform regular lifting exercises that pull, push and stabilize (such as bicep curls, bench presses, rows, tricep extensions, kettle bell swings and potentially deadlift) throughout the season can bolster upper-body strength for climbing and sprinting. I particularly encourage all women to continue upper body lifting throughout the racing season, as the the added strength makes a difference during sprinting, responding to attacks, power climbs and stabilization during longer climbs.

All riders should continue doing core strength work such as sit-ups, crunches, ball work, planks and back extensions (with or without weight) throughout the season. That said, anyone who lifts regularly should take a break from lifting entirely in conjunction with the regular end-of-the-season break. Your joints and tendons, as well as your brain, will benefit from a pause in the lifting routine.

Head Coach Kendra Wenzel has been coaching developing and elite racers for over 20 years. She enjoys working with athletes who want to see how far they can go in cycling at the top levels.