With Wenzel Coaching
Since 2011 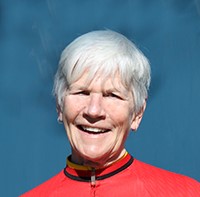 I was 38, and new to road racing, and Meredith took extra time to demonstrate and teach me safe bike handling techniques including turning skills and how to safely maneuver into a better position in a pack. She was extremely approachable and patient as she encouraged me to transform my strength into solid riding and confidence in a peloton. I took Meredith's coaching tips and encouragement and started racing in 2011, placing in the top 10 in my first two Criteriums. She is an inspiration to all riders, both men and women, and a terrific mentor." 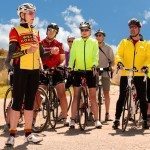 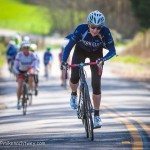 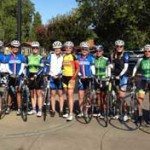 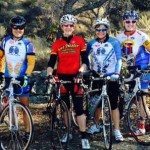 Meredith is the head instructor of a popular Bay Area bike skills clinic that has been running for more than 15 years. Her favorite coaching opportunity is to work one-on-one or in a clinic setting with clients and teams who want to improve specific skills such as paceline riding, descending, sprinting and cornering.

Meredith participated for many years as a mentor for the Northern California/Nevada Racing Association (NCNCA) Mentor Program, riding alongside beginning men and women in their first races and leading a ‘what worked/didn’t work’ session after the race. Meredith has also worked with cycling clients at their workplaces, teaching bike skills, leading lunchtime rides and encouraging companies to make cycling to work easier and more convenient for their employees.

As a rider who began racing when she was 43, Meredith is familiar with the many challenges of learning to become a better rider and racer while balancing a full life. After 20 years as a cyclist and racer, she has the experience and expertise to help others get the most from their riding. Whether it is learning the basic riding or racing skills, or honing those skills to become a faster rider/racer, Meredith can help you reach your potential through training and skills.

Meredith’s own racing was highlighted by a top 3 ranking in the Masters 45-49 Criterium and a silver medal in the 2004 District Criterium Championship. Though criteriums were her favorite, she raced in nearly all of the road, criterium and time trial events in the NCNCA region with the Left Coast Racing Team, a master women’s team which she co-founded.

After retiring from active road racing, Meredith returned to training for endurance events, including the California Triple Crown (completing at least 3 double centuries in a year). She has also completed most of the classic centuries and double century events in Northern California, including the Death Ride, Terrible Two, and Mt. Tam Double, among others.

“I am passionate about giving back to the cycling community that has taught me so much about the power of bicycles to bond people together,” says Meredith. To that end, she is the only woman lifetime and board member of the Berkeley Bike Club. She is also a member of the grass roots Bike East Bay, whose mission is to promote and encourage cycling as a means of transportation and recreation, and dedicates much of her time to help grow the sport of cycling on both local and national levels.

Meredith has always appreciated how participation in sports can help one learn about themselves as an athlete and a person. Her hands-on approach and genuine enthusiasm for the art and sport of cycling have helped her clients reach and exceed their goals.

Meredith is a native of the Bay Area and currently lives in Berkeley. She and her partner Hal Danielsen have bike toured throughout California, including self-supported rides from their Berkeley home to LA, Lake Tahoe and Yosemite. When she is not on her bike, Meredith enjoys cooking, hiking and studying native plants.

"Meredith is an excellent coach and her clinic was very well-received again this year! Many veteran cyclists said they learned so much more than they thought possible. So many positive comments and great feedback overall."
~ Rebecca Wood, Communications Director, Valley Spokesmen Bicycle Club

"I met Meredith at the Early Bird cycling series in 2010, and again in 2011. I was 38, and new to road racing, and Meredith took extra time to demonstrate and teach me safe bike handling techniques including turning skills and how to safely maneuver into a better position in a pack. She was extremely approachable and patient as she encouraged me to transform my strength into solid riding and confidence in a peloton. I took Meredith's coaching tips and encouragement and started racing in 2011, placing in the top 10 in my first two Criteriums. She is an inspiration to all riders, both men and women, and a terrific mentor." ~ Laura Thompson, Taleo Racing Team

"Meredith Nielsen's coaching was a great help to me as I prepared for my first century ride. She is very knowledgeable, enthusiastic, and explains things clearly. She has an excellent ability to relate to the problems and concerns of cyclists at all stages of development. Meredith was able to motivate me to do more than I thought I could, and I highly recommend her to anyone who wants to achieve a higher skill level in bicycling." ~ Laurie Kunit

"Meredith has been an excellent resource to me as I develop my racing skills. I chose Meredith because we seemed to have a lot in common - she started racing later in life and came from an endurance background. I knew she would understand when I talked about some of these challenges; and I was right. The training plans combined with Meredith's coaching and advice have helped me become a stronger and more competitive racer. I rely on Meredith to help me determine which races I should do, how to interpret my training, and race results. She keeps me grounded and reminds me of the goals I have set for myself to help choose next steps. She is very responsive when I reach out by email and calls. I always walk away from our conversations in a better spirit. I am extremely grateful for Meredith's support in this process."
~ Jennie Stark, Metromint Cycling

"DMC Team has hired Meredith on multiple occasions to teach our road biking cyclists safety and basic cycling etiquette, as well as various pace line skills and descending skills. We have found Meredith to be wonderful and helpful! She has taught our team group riding skills such as being predictable, having an escape path, emergency braking, communicating during the ride, rotating pace lines and even how to clean your tires of glass and debris while maintaining your position. She proactively offers individual constructive comments to each participant as needed to benefit the team overall. She has helped many of our cyclists confront their discomfort of descending to become more confident riders. With years of riding and teaching experience, Meredith shares her knowledge in a calm and professional manner. As a team we have become more confident and stronger riders. We look forward to working with Meredith in our next team clinic!" ~ Susan Horning, Diablo Multisport Connection Team